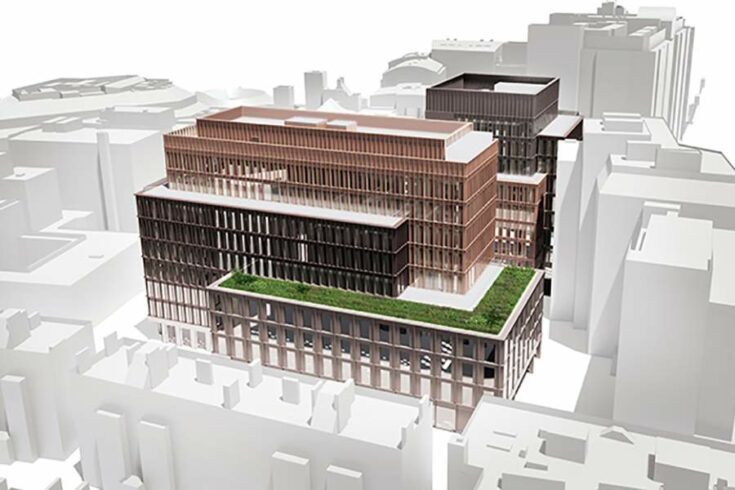 Large office developments are frequently not built to time or budget due to inconsistencies from site to site. Traditional office design and builds suffer from being too bespoke, and are often built on restricted and space-constrained sites which slows the process down.

These builds are often at the mercy of unpredictable financial factors which can drive the cost up.

Commercial developer Landsec and partners Easi-Space and Bryden Wood Technology collaborated to develop and test automated construction on a real site, and compare the efficiencies against a traditional office build.

Using a so-called platform design for manufactured assembly (or pDfMA), ‘kit of parts’ frames and building information modelling, the partners created a structural frame that could be manufactured offsite and assembled onsite using an automated assembly process.

Testing on an office build

The partners prototyped a method that used a standard 9×9 metre planning grid. This combined fabricated standardised steelwork components, reusable formwork and onsite concrete which can be installed using an automated process.

Landsec and its partners took an existing office project that was due to follow a traditional design-and-build route, and changed the approach. This allowed them to demonstrate how innovation and automated construction could be used to deliver a better outcome.

The redesign from traditional build to automated construction was done digitally and looked at how a standardised grid and a repeating unit constructed the same way each time could provide 95% of the structure.

Building information modelling was used to design the buildings and sequence the construction, and then model the cost savings. Using virtual reality headsets, the team created a walk-through building to check for clashes, risks and potential improvements ahead of construction.

Compared to building a traditional steel and concrete structure, the project partners aimed for 33% in cost saving, 25% reduction in assembly time, 40% increase in construction productivity, and improved health and safety. The results from the prototype showed that all these improvements were possible.

The pDfMA and ‘kit of parts’ approaches mean 50% fewer workers are needed on site, making sites safer and more productive. The project demonstrated that office construction could be faster, more reliable, more productive and cost less.

Adopting a more consistent ‘kit of parts’ approach to office design and builds will increase UK construction productivity, accuracy and quality. It will see costs come down by as much as a third when applied to the whole build.