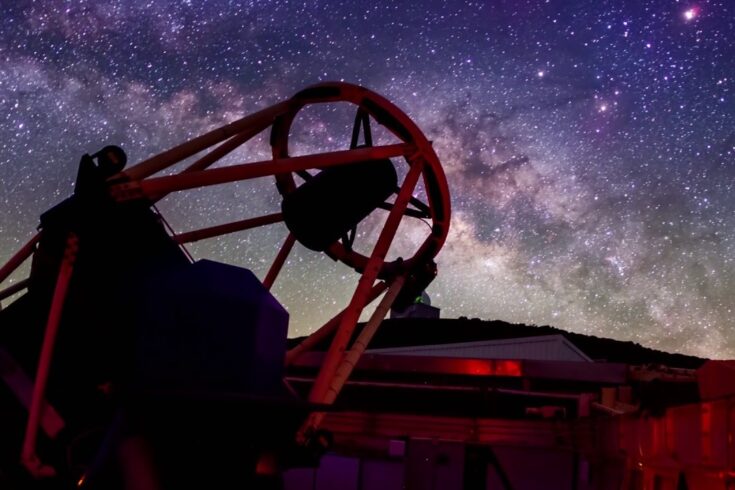 The UK contributions to the world’s largest robotic telescope can get underway thanks to £4 million funding from the Science and Technology Facilities Council (STFC).

The £24 million, four-metre-diameter telescope will be four times more sensitive and 10 times faster than the previous record-holder.

The fully robotic telescope will respond quickly to explosive and rapidly-fading astronomical events, offering new opportunities for astronomers globally to understand the universe.

The New Robotic Telescope (NRT) will be built by an international consortium led by:

NRT will allow highly sensitive, efficient and fast response observing of the most dynamic and variable objects in our universe.

Our universe is active, dynamic and variable, with explosive and cataclysmic events happening all the time. But the unpredictable nature of these events, coupled with their transience, makes them difficult to study.

Scientists will be able to use the fast robotic telescope to observe exploding stars, including supernovae and gamma ray bursts, and also search for new planets.

Speed is key and gives us a view of mysteries of the universe which have never been observed before.

So much happens in the night sky that we simply miss because we are on to it too late. The NRT will give us an almost immediate eye onto movements and phenomena, giving us an unprecedented insight into the physics of the changing sky.

Observing the skies at speed

Funding awarded today by STFC, part of UK Research and Innovation, is to support the four-year construction phase, specifically in:

The £4 million will also support the construction of the ‘clamshell’ telescope enclosure, an enclosure designed to protect the telescope from extreme weather and to allow fast rotation onto targets.

The NRT is operated remotely and scientists make requests and receive data through the web. The telescope itself picks the objects to observe itself, and at the heart of this robotic system is a sophisticated algorithm.

STFC will fund the work to create this advanced algorithm, the brain behind the eyes.

Despite our ever-increasing knowledge of the universe, there are still some celestial phenomena that remain elusive.

This fast, efficient eye on the sky will be a real asset to astronomers, who will be able to utilise its capability to see events we’ve never managed to capture before.

The UK’s world-class skills in engineering, software development and design will bring this exciting new facility to life.

This bigger telescope will be built alongside its sibling facility, the Liverpool Telescope (LT), which is also run by LJMU, on the island of La Palma in the Canaries.

The NRT will build on the highly successful legacy of the LT and will have a four-metre primary mirror made up of 18 hexagonal segments providing a sensitivity four times greater than that of the LT.

The NRT will also respond to transient triggers from space-based or survey telescopes within 30 seconds, capturing the very first seconds of evolution after an explosion.

It will be a key part of a multi-facility international approach to transient events designed to capture the most science possible.

Find out more about the NRT.