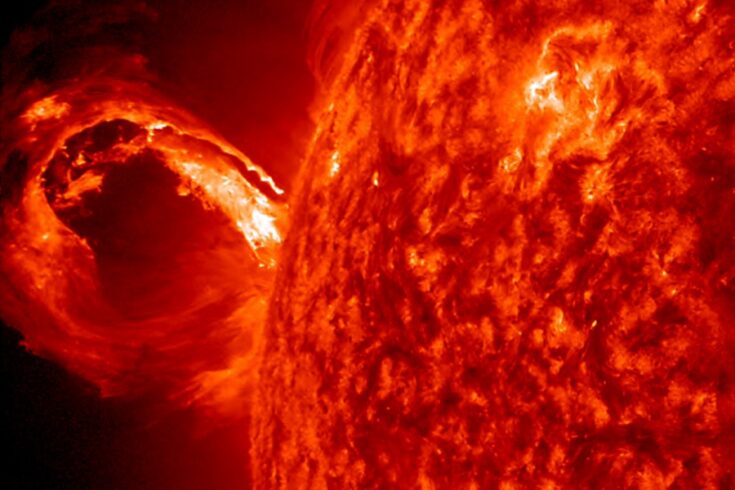 UK scientists have set out how the government can prepare for space weather events, which could impact multiple critical infrastructures in a short space of time.

Space weather is a disturbance in the upper atmosphere and space environment around the Earth, caused by activity at the Sun.

These events can disrupt technology, including:

The phenomenon was added to the UK’s national risk register in 2011.

The Space Environment Impacts Expert Group (SEIEG) advises the government on the impacts and mitigations for space weather. It has released a paper outlining the science behind the UK’s preparations and proposing a joined-up approach to planning, mitigation and response.

Professor Mike Hapgood of the Science and Technology Facilities Council (STFC)’s RAL Space, is the lead author and chair of the SEIEG. He said:

Space weather could disrupt many different economic sectors in quick succession – potentially overloading our national capability to handle such widespread disruption, similar to the concern that the COVID-19 pandemic could overwhelm the NHS. Our work provides realistic scenarios that enable government to work with industry to prepare to be ready for that.

Preparing for a storm

Severe space weather storms are rare, occurring only around once in a hundred years, but the impacts are largely untested on modern life.

The last severe storms, in 1859 and 1921, caused disruptions to telegraph systems – but today, we are far more reliant on technologies vulnerable to space weather.

This paper is part of efforts by the SEIEG to provide clear, science based scenarios to be used for preparation by the government.

Effects of an intense geomagnetic storm

The paper explores how an intense geomagnetic storm could near-simultaneously:

It could also distort satellite signals affecting space-dependent services like satellite navigation and satellite phones. Some of these effects may be localised and short-lived, others may cause lasting damage to costly infrastructure.

A severe event could leave governments and sectors dealing rapidly with several issues at once while managing the public’s perception of an issue that many people will not be familiar with.

There is now a wealth of evidence which shows that space weather is a serious problem, one that requires, not just a technical response, but also good science-based public communication to reduce the risks that false information will cause adverse public responses such as panic buying and conspiracy theories as we have seen during the COVID-19 pandemic.

As well as integrating planning into the national risk register, the UK government is investing £20 million into a programme, called Space Weather Instrumentation Measurement, Modelling and Risk (SWIMMR). SWIMMR is being run by UK Research and Innovation to improve the UK’s ability to monitor and predict space weather events.

The UK is also home to one of only three space weather prediction centres in the world, based at the UK Met Office.

In 2019, the UK Space Agency invested £60 million into the development of a new European Space Agency mission to the L5 Lagrange point. This ensured UK leadership, through STFC RAL Space, University College London and Airbus UK, of this mission towards meeting operational forecast needs, improving our ability to accurately forecast extreme events.