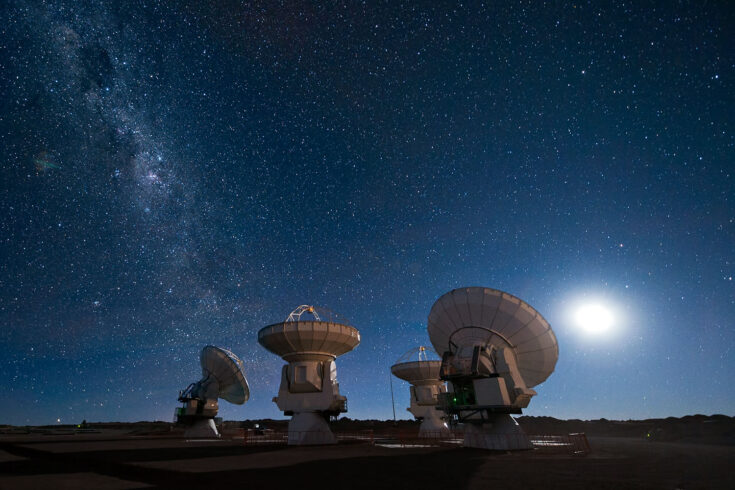 A new report released today reveals the wide-ranging benefits from UK’s membership of ESO, from scientific discoveries to economic growth.

The independent study shows that since becoming a member 20 years ago, more than 250 UK organisations have been awarded over £117 million in European Southern Observatory (ESO) contracts.

The report also highlights the vast range of opportunities for UK scientists and industry stemming from the membership and how it has led to significant new discoveries in astronomy. The membership is managed in the UK by the Science and Technology Facilities Council (STFC).

Economic benefits in the UK

ESO is the foremost intergovernmental organisation for ground-based astronomy that designs and operates some of the largest telescopes globally. UK companies have been issued contracts by ESO in areas as diverse as:

The report shows that the economic impact of benefits that can be monetised is about £45.5 million yearly against an average annual commitment of £22.7 million.

The UK has enjoyed a strong and fruitful relationship with the European Southern Observatory, allowing our astronomers to develop and use state-of-the-art telescopes to understand more about the universe and our place within it.

Over the past two decades, this valuable partnership has helped UK scientists to deliver outstanding research in astronomy. But its influence and reach goes beyond science to benefit our economy and society in the UK.

Through ESO, the UK has supported its research community in:

Research and innovation in the UK

UK teams are major contributors to the design, construction and implementation of instruments for ESO observatories, with at least 258 different UK organisations involved in successful bids to ESO.

STFC, through its Technology Department and UK Astronomy Technology Centre in Edinburgh, has developed innovative instrumentation for use on ESO’s telescopes.

One example of this is the K-Band Multi Object Spectrometer (KMOS), fitted to one of the four telescopes that make ESO’s Very Large Telescope in Chile. This provides astronomers with a far quicker solution to uncover details about galaxies and their properties.

UK scientists are also active users of ESO facilities, achieving above average proposal success rates. In 2019 to 2020 they were awarded 29% of the time while contributing 17% of fees.

The report also shows that nearly half of new ESO papers involve a UK author; an increase from 13% in the period before the UK joined.

Professor Simon Morris of Durham University has been involved in ESO for several years, in roles including UK Astronomer representative to ESO Council and Chair of ESO Observing Programme Committee. He said:

From my own experience, the chance to take leading roles in state-of-the-art instrument developments has been extremely exciting. We also have a place at the table where key decisions are made about the ways telescopes are used and indeed built.

This allows us to ensure that ESO funds collected from a large number of nations are used in ways that the UK can benefit from.

Working on an international stage

For UK researchers and firms, the benefits of ESO involvement are notable. Most UK users reported that ESO had a significant or critical impact on their ability to work in an international environment.

UK suppliers also report wider indirect benefits, among which are:

The report found that ESO’s international visibility provides the UK with a platform for international engagement, leadership and agenda-setting.

The benefits of being a member and partner of ESO goes far beyond the science benefits, proving again that scientific endeavour can go beyond its initial mission to provide lasting impacts for the good of all of society.

The ESO membership allows the UK science community to engage in pioneering research and make discoveries about our universe, and ensures the UK can maintain a pipeline of highly skilled engineers and technicians by contributing to the development of the telescopes.

The benefits extend to the business community who have been able to win international contracts and access opportunities they would otherwise be excluded from.

Read the report summary of the evaluation of the benefits that the UK has derived from its membership in ESO.

Top image:  Four antennas of the Atacama Large Millimeter or submillimeter Array (ALMA) gaze up at the star-filled night sky, in anticipation of the work that lies ahead. The UK contributed to many areas in the design and construction of ALMA. Credit: ESO, José Francisco Salgado