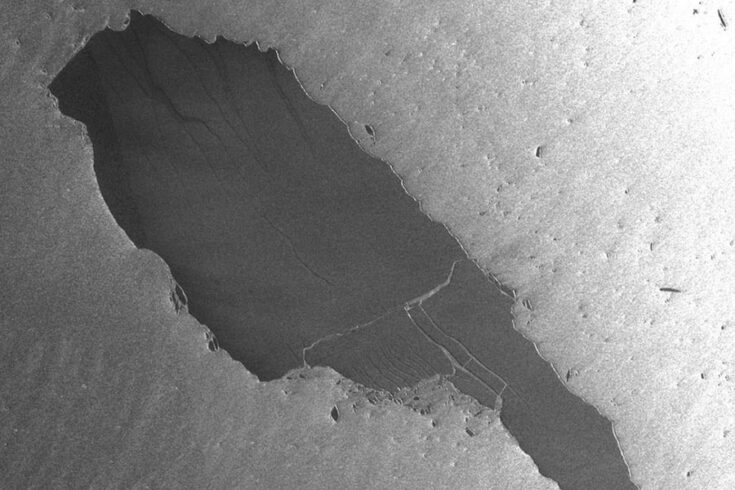 Scientists have completed the first phase of a research mission to determine the impact of the giant A-68a iceberg on one of the world’s most important ecosystems.

A team of researchers and engineers, from British Antarctic Survey (BAS) and National Oceanography Centre (NOC), have deployed two robotic gliders. The research is part-funded by the Natural Environment Research Council (NERC).

The team is on the NERC royal research ship James Cook, operated by NOC, currently 200km offshore the sub-Antarctic island of South Georgia.

Measuring the impact of the giant iceberg

The A-68a broke away as a huge iceberg from Antarctica’s Larsen C Ice Shelf in 2017.

Over the last few weeks it has been close to South Georgia, where it shattered into countless smaller icebergs. Twelve of which are still large enough to be officially named and tracked.

The largest remaining piece is 50km long and almost 900 square km in area, similar in size to the Isle of Mull in Scotland.

Oceanographer Dr Povl Abrahamsen, from BAS, is the science leader of the mission. He says:

After months of planning it’s tremendously exciting to be here. We have made measurements around the largest remaining iceberg, A-68a, and deployed one robotic underwater glider near this iceberg.

A second was deployed near the most newly named fragment, A-68p, and will be making its way toward A-68a from the north. Both gliders will continue measuring around the iceberg even after we need to leave.

It’s been a very scenic area to work in, with vast tabular icebergs that stretch as far as you can see, and so many smaller icebergs and bits of ice that have broken off of them.

The team has measured how much plankton is in the water, and will compare their findings with long-term oceanographic and wildlife studies around South Georgia and nearby Bird Island.

Data collected will help the team understand the impact of freshwater from the melting ice into a region of the ocean that sustains colonies of penguins, seals and whales. These waters are also home to some of the most sustainably managed fisheries in the world.

Understanding the impact of freshwater from melting ice

We have developed a world leading web application to pilot and manage the data from long range ocean robots. It uses satellite data to assist in piloting the gliders which can be deployed from anywhere in the world.

Having an advanced piloting tool makes these bespoke operations a lot easier. For this campaign we adapted the software to show the A-68a position from satellite data. This allows us to get the glider close to the ice and to take the necessary measurements.

These measurements will allow the science team to better understand the impact of the A-68a on the local environment and marine life.

Waters around South Georgia are recognised as one of the most biologically rich places on the planet with more described marine species than the Galapagos. It is one of the world’s largest Marine Protected Areas.

If the icebergs run aground near the island, they may pose a risk to penguins and seals during the breeding season.

We have watched with great interest as this giant iceberg has calved into smaller pieces around South Georgia.

We will be looking at the impact of enormous quantities of mineral dust coming off the icebergs that will fertilise the ocean plankton around them, and cascade up the food chain.

The research expedition to A-68a has been funded by:

Find out more about BAS on the BAS website.