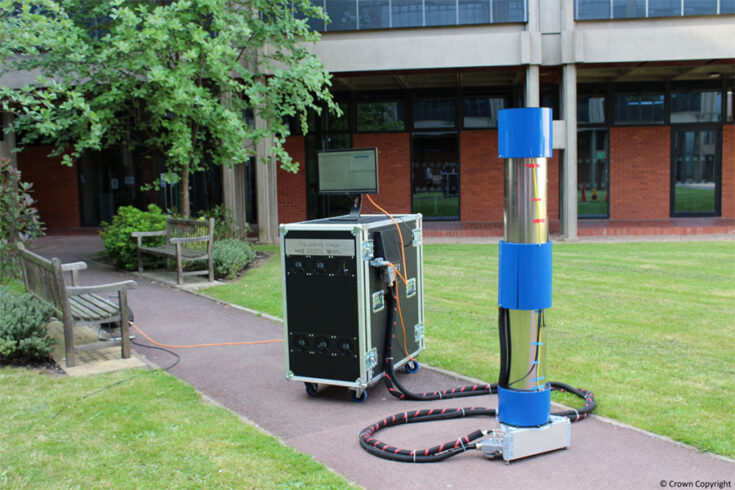 UKRI-funded researchers at the University of Birmingham have located an object below ground outdoors using quantum technology in a world first.

The researchers, from the Engineering and Physical Sciences Research Council (EPSRC)-funded UK National Quantum Technology Hub in Sensors and Timing, have reported their achievement in Nature.

It is the first in the world for a quantum gravity gradiometer outside of laboratory conditions.

The quantum gravity gradiometer was developed under a contract for the Ministry of Defence (MOD) and in the Industrial Strategy Challenge Fund (ISCF)-funded gravity pioneer project.

It was used to find a tunnel buried outdoors in real-world conditions one metre below the ground surface, winning an international race to take the technology outside.

There are two triumphs here. The first is excellent science, the culmination of many years of research led by an outstanding team in the University of Birmingham.

The other triumph is commercial. The team of companies collaborating in the gravity pioneer project, led by RSK, has kept the science market-led and focused on commercial real-world applications.

This world first is an exciting demonstration of the transformational potential of quantum technologies which will generate impact across society and the economy.

Through sustained support and by harnessing expertise from across the UK, the UK National Quantum Technologies Programme is ensuring that we are at the forefront of the coming quantum age.

The sensor works by detecting variations in microgravity using the principles of quantum physics, which are based on manipulating nature at the sub-molecular level.

The success opens a commercial path to significantly improved mapping of what exists below ground level.

Professor Kai Bongs, Head of Cold Atom Physics at the University of Birmingham and Principal Investigator of the UK Quantum Technology Hub Sensors and Timing, said:

This is an ‘Edison moment’ in sensing that will transform society, human understanding and economies.

With this breakthrough we have the potential to end reliance on poor records and luck as we explore, build and repair. In addition, an underground map of what is currently invisible is now a significant step closer, ending a situation where we know more about Antarctica than what lies a few feet below our streets.

Quantum technology in the field

Current gravity sensors are limited by a range of environmental factors. A particular challenge is vibration, which limits the measurement time of all gravity sensors for survey applications.

If these limitations can be addressed, surveys can become faster, more comprehensive and lower cost.

The sensor developed by Dr Michael Holynski, Head of Atom Interferometry at Birmingham and lead author of the study, and his team at Birmingham is a gravity gradiometer.

Their system overcomes vibration and a variety of other environmental challenges to successfully apply quantum technology in the field.

The successful detection, realised in collaboration with civil engineers, is the culmination of a long-term development programme that has been closely linked to end-users from its outset. This is led by Professor Nicole Metje of the School of Engineering.

This breakthrough will allow future gravity surveys to be cheaper, more reliable and delivered 10 times faster, reducing the time needed for surveys from a month to a few days.

It has the potential to open a range of new applications for gravity survey, providing a new lens into the underground.

Detection of ground conditions such as mine workings, tunnels and unstable ground is fundamental to our ability to design, construct and maintain housing, industry and infrastructure.

The improved capability that this new technology represents could transform how we map the ground and deliver these projects.

For national defence and security, accurate and rapid measurements of variations in microgravity open up new opportunities to detect the otherwise undetectable and navigate more safely in challenging environments.

As gravity sensing technology matures, applications for underwater navigation and revealing the subterranean will become possible.

The project is funded by UKRI as part of the UK National Quantum Technologies Programme, and under contract from MOD.

The breakthrough is a collaboration between:

Video credit: University of Birmingham
On-screen captions and an auto generated transcript is available on YouTube.

About the UK Quantum Technology Hub Sensors and Timing

The UK Quantum Technology Hub Sensors and Timing (led by the University of Birmingham) brings together experts from physics and engineering from:

The hub has a total of over 120 past and present projects, valued at approximately £200 million, and has 17 patent applications.

Four quantum technology hubs were set up at the outset, each focussing on specific application areas with anticipated societal and economic impact.

The commercialising quantum technologies challenge (funded by ISCF) is part of the NQTP. This was launched to accelerate the development of quantum enabled products and services, removing barriers to productivity and competitiveness.

The NQTP is set to invest £1 billon of public and private sector funds over its 10-year lifetime.