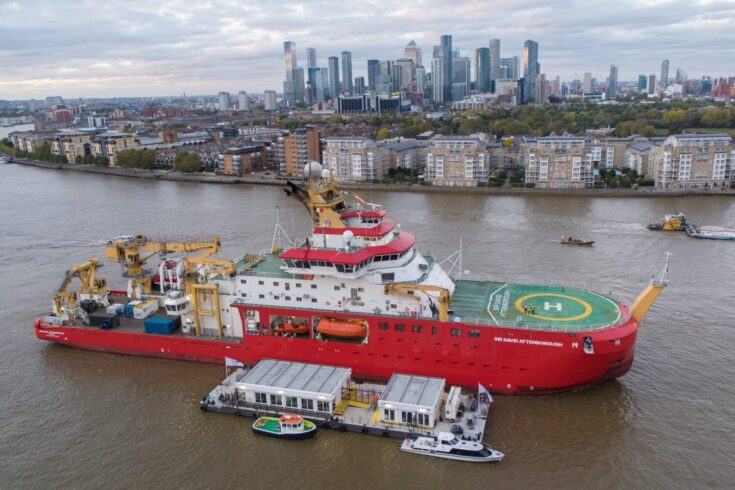 The UK’s new polar research ship has made its London debut in Greenwich today in support of the UK Presidency of the United Nations Climate Change Conference (COP26).

RRS Sir David Attenborough has been undergoing sea trials around the UK and is now ready for service. The ship will embark on its first Antarctic mission later this year.

The ship is making this special visit to Greenwich as part of a three-day public celebration hosted by the Natural Environment Research Council’s (NERC) British Antarctic Survey (BAS) and Royal Museums Greenwich (RMG).

A penguin parade and presentation of a good luck garland to the ship by local children will conclude the event.

A festival highlight includes a live-streamed tour of the state-of-the-art ship, and the launch of a new virtual reality experience. The tour will be streamed on a large screen next to the Cutty Sark and across digital channels.

Events in the National Maritime Museum and on board the RRS Sir David Attenborough are showcasing international collaboration. This includes the major UK-US International Thwaites Glacier Collaboration and the European Beyond EPICA ice core collaboration to drill the oldest ice on Earth. A selection of ocean submersibles will be on display including Boaty McBoatface.

In the week before COP26, senior scientific advisers to governments around the world have published a joint statement addressed to:

This new research platform will transform how ship-borne science is conducted in the polar regions. It has been:

It is part of a major government polar infrastructure investment programme designed to keep Britain at the forefront of world-leading research in Antarctica and the Arctic.

With COP26 only days away, it’s incredible to see the new RRS Sir David Attenborough and hear about the world-leading and ground-breaking research it will complete in the Antarctic and Artic regions.

Research, science and innovation are at the heart of the UK’s COP26 goals and at the forefront of our own climate action, from the British Antarctic Survey’s ongoing work to the Adaptation Research Alliance being launched at COP. It is vital other countries come forward with commitments on global collaboration for science and innovation at COP26 next week.

Science is not just necessary to diagnose the state of the planet, it is also needed to understand how to treat it.

Through research, we can accelerate the technological, social and economic change needed to reach net zero and this wonderful ship and its scientists will play a significant role in furthering our understanding of the effects of climate change.

The visit of our new ship the RRS David Attenborough to London, ahead of her maiden voyage to Antarctica, underlines our commitment to making our science accessible to everyone and provides an opportunity to reinforce the role and impact of outstanding research and innovation facilities to tackling complex climate challenges.

Investment in the UK’s scientific infrastructure and strong international scientific collaboration, will underpin world-leading research in Antarctica and the Arctic for the next 30 years, enabling scientists to monitor and understand the impacts of a changing climate on the polar environment.

This magnificent ship will take UK scientists deep into the heart of the ice-covered polar seas. We are very excited at the prospect of her first Antarctic mission. The on board state-of-the-art technology will give us the data and knowledge we need to understand the full impact of human activity on the polar oceans, ice melt and future sea-level rise.

The polar regions are the earth’s early warning system. Scientists have a fantastic new platform from which to monitor future change, and we will see the impact of actions taken now to mitigate climate change. This ship is set to transform how the UK supports its polar research effort.

The RRS Sir David Attenborough is one of the most advanced polar research vessels in the world and will transform how ship-borne science is conducted in the polar regions.

It will provide scientists with state-of-the-art facilities to undertake crucial research into the impacts of global changes on our oceans, marine biodiversity and climate, and ensure that the UK remains at the forefront of polar science.

Countless voyages of exploration started here in Greenwich, the home of time and navigation, and the RRS Sir David Attenborough and Ice Worlds Festival will start two more such voyages this weekend. The ship will play an important part in increasing our understanding of the polar regions and climate change.

This knowledge will inform the museum’s public engagement, an exploration by those staying on dry land, to discover how we can each play our part in changing and adapting our ambitions, expectations and behaviour to allow all life on earth to flourish.

We are proud partners of BAS in taking up the challenge of that second voyage of exploration with Ice Worlds and the opening of a window onto the future.

Find out more about Ice Worlds and how you can get involved.