Scientists have, for the first time, been able to reveal details of soft tissues preserved in one of the most instantly recognisable fossils: the ammonite.

The three-dimensional images shed new light on creatures that thrived in the oceans for 370 million years and reveal that, like their modern squid cousins, ammonites were marine jet-setters. Key findings included:

While not being the most glamorous members of the fossil record, ammonites are among the most ubiquitous inhabitants of the prehistoric world. Closely related to modern squids, these marine creatures dominated the ancient oceans from 400 million years ago until the mass extinction event that ended the reign of the dinosaurs 66 million years ago. 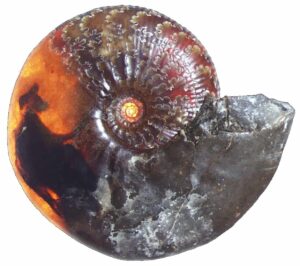 The new images captured at Science and Technology Facilities Council’s (STFC) ISIS Neutron and Muon Source (ISIS) have allowed the team to analyse the muscles and organs of an ammonite for the very first time. This has shed new light on how the cephalopod mollusc was able to propel itself through the oceans and defend itself from predators.

Dr Genoveva Burca, neutron imaging and diffraction scientist at ISIS, who initiated the collaboration for the project a few years ago and one of the co-authors says:

The correlative neutron and X-ray tomography allowed us to visualise for the very first time the internal soft parts of ammonites. It feels like going back to the future.

I’m thrilled that thanks to neutrons the paleontological research will enter a new era and the fossils will reveal more and more of their secrets. The complementary non-destructive investigations will play a major role in other future discoveries and the advancement of science.

Ammonites ranged in size from less than a centimetre to two metres in diameter. They were so prolific in the ancient oceans and lived throughout the reign of the dinosaurs that they are one of the most common fossils. They are excellent ‘index fossils’ for dating rock, allowing palaeontologists to link layers of rock with a specific ammonite species of genus and thus deduce the date the layer was deposited.

However, almost everything we know so far about ammonites is based on their hard shells, which are more easily preserved than soft tissues. Finding ammonites with the fossilised remains of soft parts is virtually unknown in the fossil record.

Ammonites are an iconic extinct group of marine animals renowned for their rich fossil record that stretches back hundreds of millions of years. Their hard shells made of calcium carbonate preserve well. However, important details of the living animal were largely still a mystery. In almost all cases, it’s only the hard shell, not the soft parts, preserved in fossil ammonites. On the rare occasions where soft parts have been found, they are mostly flattened.

Previous investigations into ammonite anatomy have relied on X-ray techniques that are unable to determine the structure of the soft tissues. By combining these results with neutron imaging on the IMAT instrument at ISIS, the researchers were able to gain previously unattainable insights into the ammonite’s inner workings.

The arrangement and relative strength of muscles reveal that the ammonite swam by expelling water through a muscular tube-like funnel called a hyponome. This sort of jet propulsion is also used today by modern cephalopods like squids and octopi.

The images have also revealed paired muscles that would have allowed the ammonite to protect itself from predators by retracting itself deep into its shell. This would have been a crucial defence mechanism as ammonites lacked defensive features such as the ink sac found in squid, and the plate-like hood of Nautilus.

Until now, because ammonite soft tissues are so rarely preserved, scientists have used the modern cephalopod Nautilus as a body plan for reconstructing ammonite biology. But, despite Nautilus being a shelled cephalopod like the ammonite, it seems ammonite biology has more in common with their shell-less relatives, squids and octopuses.

Preservation of soft parts is exceptionally rare in ammonites, even in comparison to fossils of closely related animals like squid. We found evidence for muscles that are not present in Nautilus, which provided important new insights into the anatomy and functional morphology of ammonites.

This exceptional ammonite specimen was originally found within Jurassic rocks in Gloucestershire, UK in 1998. STFC’s Neville Hollingworth, who found the specimen says:

I am thrilled to see that, at long last, this ammonite has provided important new evidence on these enigmatic creatures that swarmed in Jurassic seas. Breaking open the enclosing rock to reveal this incredible ammonite was a very lucky find indeed.

The work was carried out by a multi-institutional and interdisciplinary research team from:

By combining the high-contrast neutron images with high-resolution X-ray imaging, they created a detailed 3D computer reconstruction of the muscles and organs inside the ammonite fossil, from which they were able infer their function.

The study has been published in the journal Geology.

The ammonite was found to have the following features:

This is a calcareous tube which would have once contained living tissue. It runs through all the shell chambers and was used to adjust buoyancy between the chambers.

These fragments are proposed to be hyponome retractors: muscles used to pull the ammonite’s body back into its protective shell.

This is interpreted as the now detached siphuncular cord muscles. Used in controlling the fluid pressure in the ammonite’s shell chambers to aid buoyancy.

Extending from the main body mass this structure is interpreted as remnants of a cephalic retractor muscle.

This large object is interpreted as a u-shaped digestive system and muscular buccal mass. Comparable to living cephalopods, such as:

Extending from the main body mass this structure is interpreted as the remnants of a cephalic retractor muscle.

This small object within the body chamber is thought to represent the upper jaw or its muscle.

This zone which overlaps with the main body mass is thought to be part of the lower jaw.

The outer chamber of the ammonite has been infilled with sediment (light brown). This occurred during burial of the specimen within the marine sea-floor sediments.

These small shells have become lodged inside the ammonite’s outer chamber. These were subsequently fossilised.