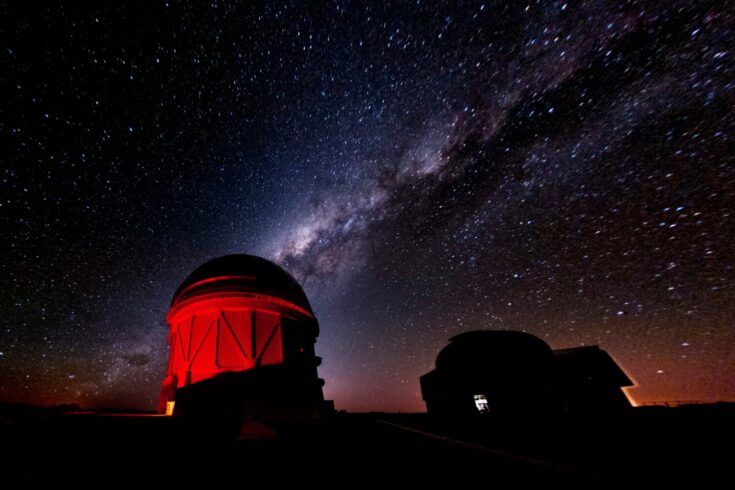 The largest-ever map of dark matter, the mysterious invisible substance thought to account for most of the mass of the universe, has been created.

An international team of scientists, co-led by a Science and Technology Facilities Council (STFC) funded UK team, created the map as part of the Dark Energy Survey (DES).

The international project aims to measure the composition of the universe and to better understand dark matter and dark energy, which is thought to be driving the universe’s accelerating expansion.

One way to investigate this is by studying light that has travelled to Earth from distant galaxies. If the light has been distorted, it suggests there is matter in the way, bending the light as it comes towards us. Astronomers are mapping these distortions which may suggest invisible, but gravitating, mass.

The team used an international supercomputer to analyse images of 100 million galaxies, looking at their shape to see if the light had been stretched.

In our map, we see a similar pattern as we do with visible matter – a web-like structure with dense clumps of matter separated by large empty voids.

Observing these cosmic-scale structures can help us to answer fundamental questions about the universe.

The new map covers a quarter of the sky of the southern hemisphere.

The map was created as part of the DES collaboration, hosted by the US Department of Energy’s Fermi National Accelerator Laboratory (Fermilab) and involving more than 400 scientists from 25 institutions in seven nations. The collaboration has catalogued hundreds of millions of galaxies over six years, from 2013 to 2019.

In the UK the study is funded by STFC.

The DES Collaboration is a perfect example of using international collaboration to tackle fundamental questions, and enhance our understanding of the origins and evolution of the universe.

The UK has played a significant role to this exciting scientific endeavour, in contributing cutting-edge technology to enable the ‘eyes’ of the survey and in the exploitation of the data.

Scientists at UCL, with funding from STFC, provided precision optics systems for the 570-megapixel dark energy camera which has been used to survey the dark sky.

The camera is mounted on the Blanco telescope at the National Science Foundation’s Cerro Tololo Inter-American Observatory in Chile.

Visible galaxies form in the densest regions of dark matter. When we look at the night sky, we see the galaxy’s light but not the surrounding dark matter – like looking at the lights of a city at night.

By calculating how gravity distorts light, a technique known as gravitational lensing, we get the whole picture – both visible and invisible matter. This brings us closer to understanding what the universe is made of and how it has evolved. It also shows the power of artificial intelligence methods to analyse one of the largest data sets in astronomy.

Scientists in the DES Collaboration have carried out new analysis of the first three years of the survey.

The analysis suggests that matter is distributed throughout the universe in a way that is consistent with predictions in the standard cosmological model. This is the best current theory of the how the universe was created and what it is made of.

But the analysis found hints, as with previous surveys, that the universe may be a few per cent ‘smoother’ than predicted, with fewer ‘clumps’ of matter.

DESI is operated by the Lawrence Berkley National Laboratory in the US and also receives STFC-funded support from the UK.

Top image:  The Dark Energy Survey uses a 570-megapixel camera mounted on the Blanco Telescope, at the CTI Observatory in Chile, to image 5,000 square degrees of southern sky. The survey has already discovered more than 1,000 supernovae and mapped millions of galaxies to help us understand the accelerating expansion of our universe. Credit: Reidar Hahn / Fermilab