Living bricks can generate energy in the home 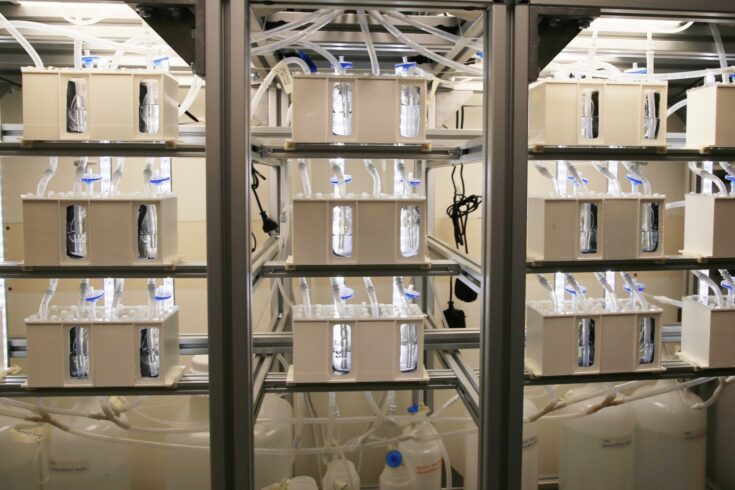 The Active Living Infrastructure: Controlled Environment (ALICE) consortium has created a prototype that could both revolutionise housing and replace fossil fuels.

If you thought having virtual assistance in your home makes life easier, how about having a home that can:

The ALICE prototype is funded by:

It brings together several ground-breaking threads of bio-digital research.

Together it creates a living, breathing, energy-generating microbial system that can simultaneously supply power to your home and talk to you through augmented reality to tell you how productive and ‘happy’ it is.

The base of the prototype is a wall of “living bricks” which can form entire walls and structures.

These living bricks contain microbes that use liquid waste to generate energy, which can then be turned into electricity and clean water. But it’s not that simple…

In order to know how productive the microbes are, ALICE uses biosensors that record data produced by the microbial electrons.

ALICE then fuses biological and digital technologies to converse with the microbes and see how happy they are. It can tell us whether they need to be fed or warmed to generate more bioelectricity.

ALICE is self-powered by the microbial fuel cells inside each brick. It can not only be used as a source of household energy but can also transform domestic liquid wastes into clean water fit for reuse.

A digital overlay of the information gathered from ALICE’s conversations with the microbial life in each brick, is then displayed back to the household using augmented reality.

ALICE has the potential to permanently wean humanity off fossil-fuels.

This project is part of a range of prototypes that are re-designing our buildings and reshaping the future of architecture into a two-way conversation with nature; using microbes is our way of counteracting the impacts of our increasingly hostile planetary systems. I hope this research leads to a more a sustainable future for all.

Professor Armstrong has given a panel session talk on her work, including ALICE, at this year’s American Association for the Advancement of Science (AAAS) annual meeting.

This is a really revolutionary project which could change our residential environment and have a significant impact on how we power our homes in the future. EPSRC is proud to have funded the early investments that led to this work.

The results published today are a great example of a collaborative effort in tackling a key issue of the 21st century and should be celebrated as both an achievement for the future of sustainable living and an accomplishment of the science intrinsic to engineering biology.

An EPSRC Career Acceleration Fellowship was awarded to Professor Ioannis Ieropoulos at the Bristol Robotics Laboratory, University of the West of England, in 2010.

To this day, findings from the five-year programme are still being reported, many of which have gone into subsequent projects including Professor Armstrong’s ALICE and Living Architecture projects.

Subsequently, The EcoBot programme, funded between 2002-2010 was also funded by two EPSRC grants for bio-robotics which also fed into this research. It provided a foundation from which the project could begin.