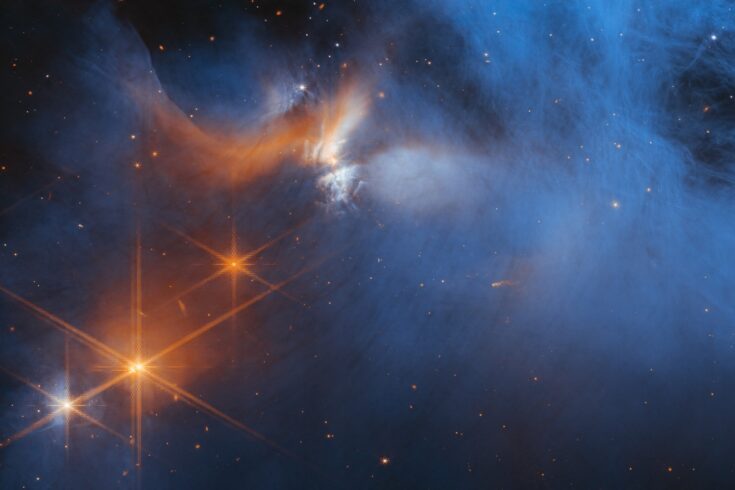 Astronomers using the James Webb Space Telescope (Webb) have discovered a range of different ice particles in the darkest, coldest regions of a molecular cloud.

The international team, which was part-funded by the Science and Technology Facilities Council (STFC), included UK scientists from the Open University, Sussex University and Herriot Watt University.

Their findings allow astronomers to examine the simple icy molecules that will be incorporated into future exoplanets, while opening a new window on the origins of more complex molecules that are the first step in the creation of life.

Ices are a vital component of a habitable planet as they carry several essential light elements such as carbon, hydrogen, and oxygen.

These elements are important ingredients in molecules such as sugars and alcohols as well as planetary atmospheres and surfaces that enable life to form and flourish.

As a result, analysis of the ices discovered in ’interstellar molecular clouds‘ as part of this study could provide exciting insights into the building blocks of life in the Universe.

Dr Helen Fraser, an STFC-funded astronomer at the Open University involved in the research said:

Even though we detected more ice than ever previously reported, the amounts of those light elements that are vital ingredients for is still less than we expect.

For astronomers that is exciting, because it means there is something we don’t yet fully understand about interstellar chemistry; and that challenges us not just to keep observing, but also to experiment in the laboratory to try to understand these data from our telescopes.

The team targeted ices buried in a particularly cold, dense, and difficult to investigate region of the Chameleon I molecular cloud. A region roughly 600 light-years from Earth which is currently in the process of forming dozens of young stars and planets.

The ices were detected by studying how starlight from stars beyond the molecular cloud was absorbed by molecules at specific infrared wavelengths, visible to Webb. This was done using the advanced Midi InfraRed Instrument (MIRI) as well as the Near InfraRed Spectrograph (NIRSPEC) and the Near-InfraRed Camera (NIRCAM).

This process leaves behind chemical fingerprints, known as absorption spectra, in the infrared light which Webb detects and records.

It is only 6 months since Webb started science operations and we are learning more about the Universe with each new image and piece of data that it provides.

This study shows what can be achieved when information from MIRI, NIRCam and NIRSpec is combined to give us incredibly detailed data, in this case unlocking new insights into the formation of planets and composition of their atmospheres.

A fundamental ambition of Webb is to better understand how the necessary building blocks for life emerge and this discovery has brought us an exciting step closer to that goal.

The team were able to identify frozen forms of a wide range of molecules including evidence of prebiotic molecules in these dense cloud ices.

Although they didn’t definitively attribute these signals to specific prebiotic molecules, this proves for the first time that complex molecules form in the icy depths of molecular clouds before stars are born.

This is the most comprehensive census to date of the icy ingredients available to make future generations of stars and exoplanets.

This research forms part of the Ice Age project, one of Webb’s 13 Early Release Science programs.

Webb is the world’s premier space science observatory. Webb will solve mysteries in our solar system, look beyond to distant worlds around other stars, and probe the mysterious structures and origins of our universe and our place in it.

The UK is playing a major role by leading the European Consortium. The UK, partnered with US institutes, designed, built and tested one of the 4 main science instruments, the MIRI, backed by UK government funding.

MIRI was developed through a 50:50 partnership between NASA and ESA. The Jet Propulsion Laboratory (JPL) led the US efforts for MIRI and a multinational consortium of European astronomical institutes contributed for ESA.

George Rieke with the University of Arizona is the MIRI US science team lead.

Alistair Glasse with UK ATC is the MIRI instrument scientist, and Michael Ressler is the US project scientist at JPL.

The MIRI cryocooler development was led and managed by JPL, in collaboration with NASA’s Goddard Space Flight Center in Greenbelt, Maryland, and Northrop Grumman in Redondo Beach, California.