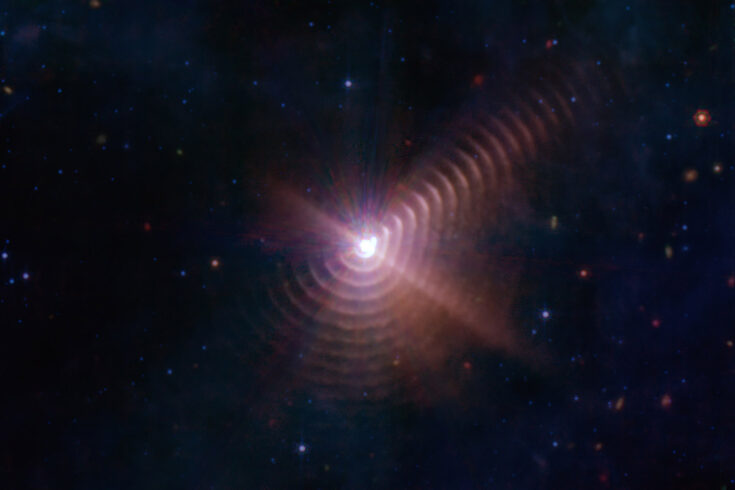 New image from the James Webb Space Telescope (Webb) reveals rings of cosmic dust around a pair of stars collectively known as Wolf-Rayet 140.

The full colour images released by NASA are the most detailed ever captured of this cosmic phenomenon. Ground based telescopes had identified 2 rings, but at least 17 rings can be seen using Webb’s Midi InfraRed Instrument (MIRI).

In addition to Webb’s overall sensitivity MIRI is uniquely qualified to study the dust rings because it sees in infrared light, a range of wavelengths invisible to the human eye.

The UK Astronomy Technology Centre (UK ATC) in Edinburgh played a key role in designing and building MIRI’s spectrometer. This was used to reveal the composition of the dust, formed mostly from the material ejected by the star which is a special type known as a Wolf-Rayet star.

Some other Wolf-Rayet systems form dust, but this pattern is unique to Wolf-Rayet 140.

These concentric elongated circles were created when the 2 stars’ orbits bring them closer to each other. The gases these binary stars release is compressed as they pass each other, forming rings of dust that look like the whorls of a gigantic fingerprint 70,000 astronomical unit across (that’s 70,000 times the distance between the Earth and the Sun).

Much like a tree trunk the rings mark the passage of time as the stars’ paths bring them together about once every eight years leaving these unique patterns in their wake.

Using MIRI’s Medium Resolution Spectrometer’s data, the new study provides the best evidence yet that Wolf-Rayet stars produce carbon-rich molecules of dust. And the preservation of the dust shells indicates that this dust can survive in the hostile environment between stars, going on to supply material for future stars and planets.

Dr Oliva Jones, Webb Fellow at the UK ATC, and co-author of this new study, said:

Not only is this a spectacular image but this rare phenomenon reveals new evidence about cosmic dust and how it can survive in the harsh space environments. These kinds of discoveries are only now opening up to us through the power of Webb and MIRI.

Ryan Lau, an astronomer at the National Science Foundation’s NOIRLab in Tucson, Arizona, and lead author on this new study published in Nature Astronomy, said:

We’re looking at over a century of dust production from this system arranged in remarkably evenly spaced shells. The image also illustrates just how sensitive this telescope is, revealing new details we could not see before.

The most powerful telescope ever launched

Webb is the largest, most powerful telescope ever launched into space. The culmination of over 20 years hard work and scientific innovation.

Webb launched on Christmas Day 2021 and travelled 1 million miles to its new home in orbit at the second Lagrange point. After several months of commissioning and testing, the first images from Webb were released in July 2022, revealing stunning new details about the Universe.

Diagram illustrating the comparative size of the Sun, the Wolf-Rayet Star and the O Star. Credit: NASA, JPL-Caltech

Webb is the world’s premier space science observatory. Webb will solve mysteries in our solar system, look beyond to distant worlds around other stars, and probe the mysterious structures and origins of our universe and our place in it. Webb is an international program led by NASA with its partners:

MIRI was developed through a 50-50 partnership between NASA and ESA. The Jet Propulsion Laboratory (JPL) led the US efforts for MIRI, and a multinational consortium of European astronomical institutes contributed for ESA.

The MIRI cryocooler development was led and managed by JPL, in collaboration with NASA’s Goddard Space Flight Center in Greenbelt, Maryland, and Northrop Grumman in Redondo Beach, California.