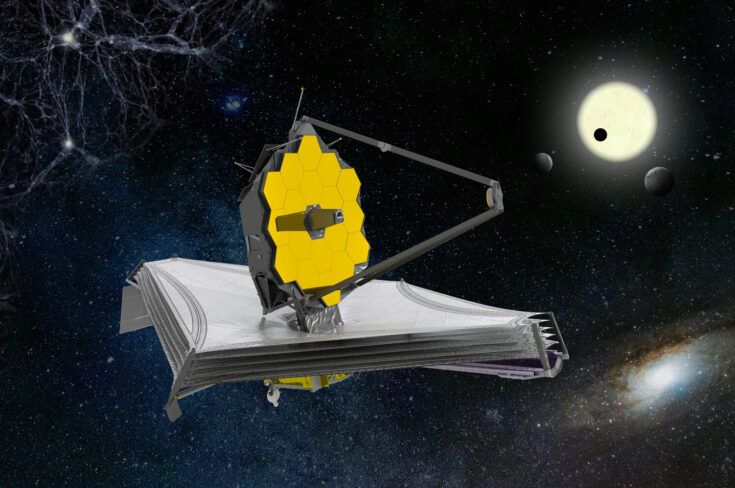 The once-in-a-generation spacecraft has been launched today with scientists and engineers across the UK playing a vital role in realising the mission.

Earlier today the telescope, known as just ‘Webb’, blasted off from Europe’s spaceport in French Guiana, in the culmination of decades of scientific collaboration.

The mission is led by:

The UK played a major role by leading the European Consortium that, partnered with US institutes, designed, built and tested one of the four main science instruments.

The successful launch of the Webb Telescope marks another giant leap forward for space discovery and our understanding of the universe.

It is testament to the immense skill and ingenuity of the UK’s world-leading scientists and engineers, together with their partners in Europe and the United States, that we have witnessed this historic moment today.

Today is a monumental milestone for international and UK space science: the Webb Space Telescope will allow us to go further and deeper to explore and discover our planetary universe.

The project draws heavily on the world-class expertise of top UK scientists and engineers who were able to deliver vital pieces of this complex and powerful telescope.

Being at the heart of this international project showcases the innovative talent of the UK’s world-leading scientists and engineers, and emphasises our position as a global science powerhouse.

The telescope is set to redefine our understanding of the cosmos and unveil some of the secrets of the distant universe.

Webb will allow scientists to determine how the first galaxies were formed and will see our own solar system in new ways and never-before-seen detail.

Scientists and engineers in the UK were crucial to the development and launch of the Mid-Infrared Instrument (MIRI). MIRI will be able to:

The MIRI development has been funded by:

Webb is set to re-write the textbooks on astronomy, showing us things about the universe we have never been able to see before.

I am excited to see the fascinating discoveries the spacecraft makes as it reveals the evolution of the universe.

The UK has played a crucial role in this once-in-a-generation mission, developing the MIRI, which will examine the physical and chemical properties of objects in the early universe in greater detail than ever.

This has been a fantastic example of academic-industry partnership, showcasing the skills and expertise of our scientists and engineers.

Webb in the UK

MIRI will deliver a host of capabilities, boasting:

MIRI was designed, built, and tested by a European Consortium of 10 member countries led by the UK, in partnership with the US.

The UK’s lead role in the instrument involves taking responsibility for:

To see Webb launch, with MIRI on board, after more than two decades is a seminal moment.

MIRI is a special instrument, for the breadth of its science, the team that built it, and being the coolest instrument on Webb. The MIRI team rose to the challenges and brought some exquisite engineering solutions to make it a reality.

The Webb mission as a whole is an amazing technological breakthrough in scale and complexity, and this extends to the instruments, including MIRI. With the launch, all of us are excitedly anticipating the first MIRI data and the new view of the universe we will have.

What’s next for Webb

Although Webb has successfully launched, its journey is only just beginning.

The giant mirror for the telescope had to be launched as 18 segments folded inside the launch vehicle and it must be unfolded, and all the segments perfectly aligned, in space.

A huge sunshield the size of a tennis court is needed to keep the instruments cold enough to work and this must also be unfurled in space.

Webb will then go on a month-long journey to its destination, a million miles from Earth. In the six months after launch, the observatory commissioning will take place, with first results expected in the summer of 2022.

There are few times in a lifetime when one can celebrate the start of a transformational international science mission such as this. The UK, as part of the international team, has played a key role in getting us to this point, and our world-class scientists and engineers will continue to be pivotal in the mission’s success.

Now Webb’s journey has begun, we wait eagerly to see the universe through Webb’s eyes and can look forward to scientific discoveries built upon the hard work of our scientists and engineers.

The roles shared between the UK institutions in the MIRI partnership as follows:

MIRI was developed as a 50-50 partnership between Europe and the USA:

All of the MIRI partners have key roles in preparing the commissioning and calibration of the instrument and support post-launch verification.

More about Webb in the UK

The MIRI team is not the only contribution made by the UK to Webb.  Two senior academics were appointed by ESA to the NIRSpec Science Team and will have major roles in the early science with this ESA provided instrument.

Several UK universities and companies were awarded subcontracts for development of critical components through: