How humans develop larger brains than other apes 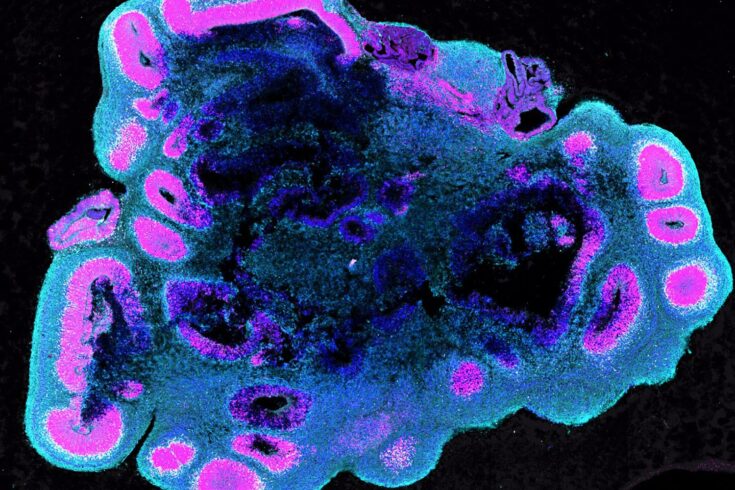 A new study is the first to identify how human brains grow much larger, with three times as many neurons, compared with chimpanzee and gorilla brains.

Similar to actual brains, the human brain organoids grew a lot larger than the organoids from other apes.

How big our brains are

Dr Madeline Lancaster, from the MRC LMB, who led the study, said:

This provides some of the first insight into what is different about the developing human brain that sets us apart from our closest living relatives, the other great apes. The most striking difference between us and other apes is just how incredibly big our brains are.

During the early stages of brain development, neurons are made by stem cells called neural progenitors. These progenitor cells initially have a cylindrical shape that makes it easy for them to split into identical daughter cells with the same shape.

The more times the neural progenitor cells multiply at this stage, the more neurons there will be later.

As the cells mature and slow their multiplication, they elongate, forming a shape like a stretched ice-cream cone.

Previously, research in mice had shown that their neural progenitor cells mature into a conical shape and slow their multiplication within hours.

Now, brain organoids have allowed researchers to uncover how this development happens in humans, gorillas and chimpanzees.

They found that in gorillas and chimpanzees this transition takes a long time, occurring over approximately five days.

Human progenitors were even more delayed in this transition, taking around seven days. The human progenitor cells maintained their cylinder-like shape for longer than other apes and during this time they split more frequently, producing more cells.

This difference in the speed of transition from neural progenitors to neurons means that the human cells have more time to multiply. This could be largely responsible for the approximately three-fold greater number of neurons in human brains compared with gorilla or chimpanzee brains.

We have found that a delayed change in the shape of cells in the early brain is enough to change the course of development, helping determine the numbers of neurons that are made.

It’s remarkable that a relatively simple evolutionary change in cell shape could have major consequences in brain evolution. I feel like we’ve really learned something fundamental about the questions I’ve been interested in for as long as I can remember – what makes us human.

Differences in the ZEB2 gene

To uncover the genetic mechanism driving these differences, the researchers compared gene expression – which genes are turned on and off – in the human brain organoids versus the other apes.

They identified differences in a gene called ‘ZEB2’, which was turned on sooner in gorilla brain organoids than in the human organoids.

Conversely, turning on the ZEB2 gene sooner in human progenitor cells promoted premature transition in human organoids, so that they developed more like ape organoids.

Organoids are a model

The researchers note that organoids are a model and, like all models, do not fully replicate real brains, especially mature brain function. But for fundamental questions about our evolution, these brain tissues in a dish provide an unprecedented view into key stages of brain development that would be impossible to study otherwise.

Dr Lancaster was part of the team that created the first brain organoids (Nature) in 2013.

This study was funded by the MRC, European Research Council and Cancer Research UK.