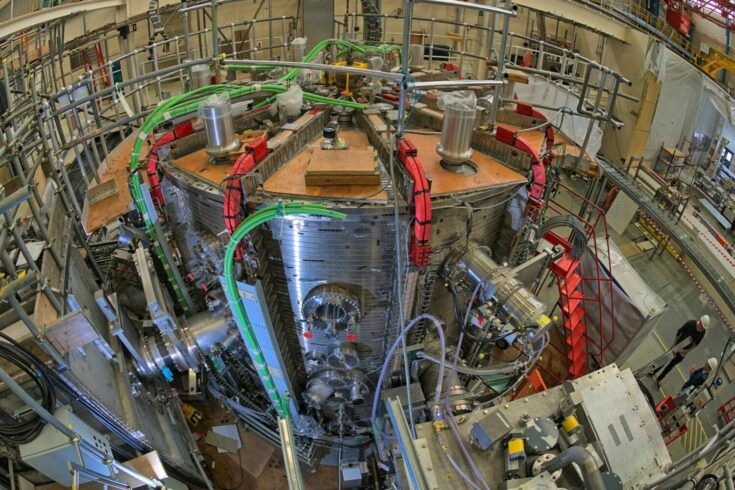 The team behind the Mega Amp Spherical Tokamak Upgrade (MAST-U) has received the Royal Academy of Engineering’s Major Project Award for 2021.

The UK Atomic Energy Authority (UKAEA) team was presented with the award at an event in London on 13 July that was attended by Royal Fellow of the Academy, HRH The Princess Royal.

MAST-U’s compact fusion design, the ‘spherical tokamak’, has the potential to provide a cheaper, more efficient means of providing fusion energy than is possible in larger devices.

However, a big engineering challenge in getting the more compact machines on the electricity grid is how to sustain a fuel 10 times hotter than the Sun in a smaller volume without damaging the machine itself.

The team at Culham led the design and production of a complex and technically challenging exhaust system, called the Super-X divertor, on MAST-U.

This reduces the heat of the exhaust material by a factor of 10 and channels it out of the machine at temperatures low enough for the machine’s components to withstand. This means that they can last much longer and increase the amount of time a future fusion power plant is operational and thus its economic viability.

The team embarked on a design and build programme of MAST-U in 2010, with funding from the Engineering and Physical Sciences Research Council (EPSRC), part of UK Research and Innovation.

The MAST-U leadership team reflects the breadth of engineering capability working on this complex project, from high-voltage power and complex and precise mechanical assembly to control and instrumentation, underpinned by transformative, ambitious science.

The recipients of the Major Project Award are:

By November 2020, they had completed the new £55 million device and performed fusion tests for the first time.

The UK is the pioneer of smaller, cheaper fusion devices and the Award Committee was very proud to reward the engineers behind the success of MAST Upgrade.

The project delivers such an important boost to plans for a prototype fusion power plant in the UK and ultimately the affordable and efficient delivery of a new and sustainable source of electricity.

This award is a wonderful recognition of the enthusiasm, perseverance and engineering innovation that has gone into achieving MAST-U.

Everyone who has worked on MAST-U and been part of this incredible journey should be very proud of this award.