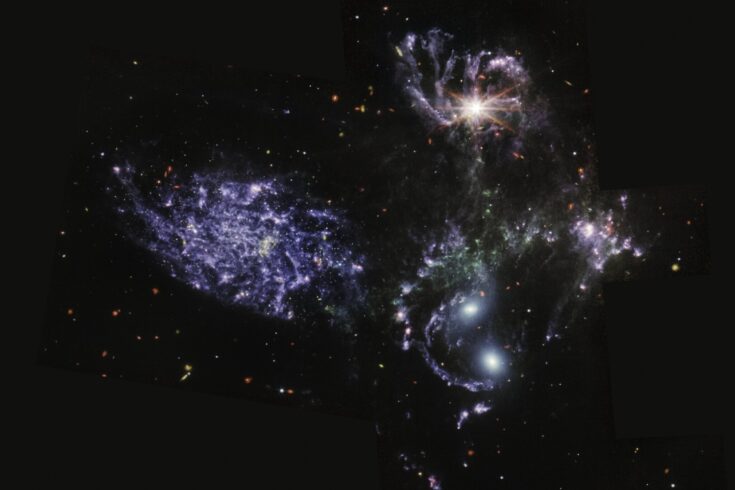 The first full colour images captured by the James Webb Space Telescope have been released by NASA.

Webb is the largest, most powerful telescope ever launched into space and these are the most detailed images ever captured of our universe.

The culmination of over 20 years hard work and scientific innovation, these astonishing images reveal the power of Webb. Showcasing Webb’s 17 different instrument ‘modes’ and the possibilities these offer for observing and studying the cosmos.

A new way to look at the universe

The UK’s main contribution to Webb, is the Mid-Infrared Instrument (MIRI), one of four scientific instruments on board.

Most of the pictures released today include images or spectra captured by MIRI. Demonstrating the instrument’s ability to see the redshifted light of distant galaxies, newly forming stars and planets.

The stunning images show how MIRI on Webb provides a new way to look at the universe.

For example, in the amazing new pictures of Stephans Quintet taken with both MIRI and NIRCam. We can see that while the NIRCam images reveal and resolve the stars, MIRI has captured the fireworks of massive bursts of star formation in unprecedented detail.

The MIRI spectroscopy of the region near the blackhole illustrates the scientific power of the integral field units, made in the UK, by revealing the distinct regions of ionized and molecular gas and their kinematics (movement).

British contributions have been integral to the development and construction of Webb. The UK played a major role by leading the European Consortium which, partnered with US institutes, designed, built and tested MIRI.

The MIRI development has been funded by the UK Space Agency and STFC, with UK government funding, and ESA.

Mission to the stars

Webb launched on Christmas Day 2021, then travelled one million miles to its new home among the stars. The complex sunshield and mirrors unfolding on this month-long trip through the cosmos.

Scientists, engineers and astronomers from STFC’s UK ATC and RAL Space were actively involved in this complex and painstaking commissioning process.

Working alongside international colleagues at the Space Telescope Science Institute in Baltimore, monitoring and commanding MIRI and Webb in shifts, 24 hours a day.

I can’t understate what an incredible moment this is for everyone who has been involved in this mission.

I am immensely proud of the team who contributed to designing and constructing MIRI, but especially my STFC colleagues.

It is so exciting to see MIRI acting in perfect harmony with the other instruments to deliver these magnificent images.

When I think about what has been achieved here, peering into depths of space and time with this level of detail, it almost seems to be the stuff of science fiction.

But the reality is that the hard work and imagination of our scientists, engineers and technician has got us to this point.

It is now up to the brilliant astronomers in the UK and across the world to study the new data and exquisite images to uncover the secrets of ancient stars and galaxies.

A unique view of the universe

It is rare in science to make the revolution in capability that is provided for mid-infrared astronomy by MIRI on Webb.

It is an honour and a pleasure to have led the MIRI team in this achievement, and first and foremost I would like to thank everyone who has contributed along the way to make this possible.

The amazing images are truly stunning and demonstrate the new and unique view of the universe that MIRI provides.

These images and spectra would not have been possible without the international collaboration between the many MIRI partners and stakeholders along with the fantastic work of the Webb team to build this powerful new observatory.

With congratulations to all concerned, I am looking forward excitedly to the many discoveries that will come from MIRI.

This is a milestone moment that has been more than 20 years in the making, and it is very significant for all of us at UK Space Agency.

It is also significant for the scientists and engineers across the UK who have developed and delivered vital parts of the James Webb Space Telescope.

UK experts led the European consortium to develop the MIRI on board. This allows Webb to ‘see’ faint infrared light invisible to the human eye and peer into the past to observe the very first stars and galaxies that formed after the Big Bang.

This has never been done before, so it’s incredibly exciting to see what this looks like for the first time, and what we can learn from it.

Instruments such as MIRI will revolutionise our understanding of the universe and put British scientists at the forefront of the exciting new discoveries set to be made by Webb over the next decade.

These images are just the start of the ground-breaking science to come. Webb will provide detailed analysis of exoplanet atmospheres and look back through time towards beginning of the universe to observe the formation of galaxies and stars.

All the images released by NASA are available to view online.

MIRI was developed as a 50:50 partnership between Europe and the US. The Jet Propulsion Lab (JPL) leads the US efforts for MIRI with George Rieke, University of Arizona as the science lead. Gillian Wright (UK ATC) is the European Principal Investigator.

The MIRI cryocooler development was led and managed by JPL and the focal plane systems (detectors and signal chain electronics) and the flight software that operates all the components were also provided by JPL.

Chalmers University of Technology led the Swedish contribution of dichroics and filters and DIAS led the Irish provision of filters and dichroics.

CEA led the French contribution of the MIRI imager sub-system and coronagraphs development.

The University of Leiden led the Dutch contribution of the spectrometer main optics subsystem and gratings development.

ETH (PSI) led the contamination control cover and its mechanism in Switzerland.

MPIA led the German contribution of the wheel mechanisms for both the imager and spectrometer and also provided leadership of the electrical design.

CSIC led the Spanish provision of the telescope simulator used to test the instrument science performance.

All the MIRI partners have key roles in preparing the commissioning and calibration of the instrument and support post-launch verification.

More about MIRI development work in the UK

The roles shared between the UK institutions in the MIRI partnership as listed below.

More about Webb in the UK

The MIRI team is not the only contribution made by the UK to Webb. Two senior academics were appointed by ESA to the NIRSpec Science Team and will have major roles in the early science with this ESA provided instrument.

Several UK universities and companies were awarded subcontracts for development of critical components through ESA, NASA and the lead MIRI institutes.