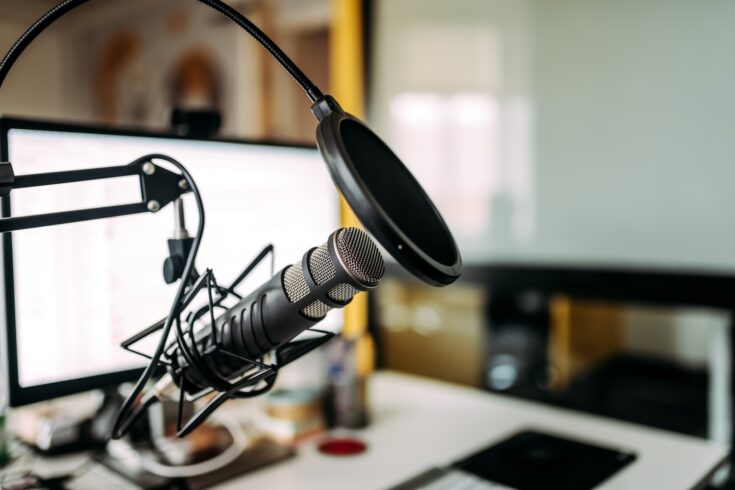 10 of the UK’s most promising arts and humanities early career researchers have been announced as this year’s New Generation Thinkers.

The names of the 10 researchers were revealed as part of a special episode of Free Thinking on BBC Radio 3 as broadcast on 31 March at 22:00.

The broadcast was introduced by former New Generation Thinker Laurence Scott and is now available on BBC Sounds.

The 2022 New Generation Thinkers will bring new insights into diverse topics such as:

Each New Generation Thinker will be given the opportunity to share their pioneering research by making programmes for BBC Radio 3.

Every year, BBC Radio 3 and AHRC hold a nationwide search for academics with new ideas that will resonate with a wider audience.

These New Generation Thinkers represent some of the brightest scholars in the country.

Their research has the potential to redefine our understanding of an array of topics, from our history to the way we speak.

The New Generation Thinkers will have the prestigious opportunity to communicate their research by making programmes for BBC Radio 3.

They will also be provided with unique access to training and support from AHRC and the BBC.

New Generation Thinkers alumni have gone on to become:

Opportunity for training and development

The final 10 academics taking part in the scheme were chosen after a four-month selection process, including a series of day-long workshops.

They have undergone training and development with AHRC.

They will also spend a year being mentored by producers from Radio 3’s Free Thinking programme, where they will appear and take part in discussions throughout the year.

They will also be working on episodes of The Essay to be broadcast on BBC Radio 3 next spring.

Meanwhile you can find examples of other programmes made by New Generation Thinkers:

We are delighted to join again with the BBC to support the New Generation Thinkers scheme, one of the major ways that AHRC inspires arts and humanities researchers across the UK to engage with a wider audience.

From fascinating insights into art, literature, and history to the most challenging problems of our day, this is research at its most vital and compelling.

This prestigious partnership offers an opportunity for early career researchers to develop the confidence and skills to work with diverse audiences, and our New Generation Thinkers lead the way in building the public impact of arts and humanities.

Exploring our past and present

Once again, Radio 3 joins the colleagues at AHRC to celebrate the New Generation Thinkers intake: 10 academics who are engaged in research projects exploring our past and present, linking these two dimensions, and offering interesting perspectives on our understanding of both.

We are thrilled to be able to give these academics a programme of mentoring to help bring their work to as wide an audience as possible, and we hope that listeners will find these explorations, on such a wide variety of topics, stimulating and inspiring.

Find out more about the scheme: develop your media skills with the New Generation Thinkers scheme.

Applications for the 2023 scheme will open this summer. Sign up to alerts from our funding finder to stay up to date with the latest opportunities.

A short history of musical notation

Pick up a score and, whether or not you read music, you feel on familiar ground.

Surely it’s simply a way of precisely documenting a piece of music so any future musician, amateur or professional, can just reproduce it?

But throughout the centuries there has been a whole lot more to reading music than first meets the eye.

Ellie Chan’s essay explores the way that attempts to visualise music have been at odds with the ephemeral nature of musical performance.

In all its forms, music has always been a visual, as well as aural, art form.

Ellie is Leverhulme Research Fellow in the music department at The University of Manchester where her research looks at what it meant to read, write, and picture music in Tudor England.

She is currently writing a book on invisible music notation.

Her first non-fiction children’s book ‘There is Art Everywhere’ is due out this summer.

Perched on a dusty shelf in Charles Dickens’s The Old Curiosity Shop, a dunce’s hat rules over the schoolroom, used to single out any child who makes a mistake.

But, what is ‘average intelligence’ and what does it mean to be ‘stupid’ in the first place?

Louise’s essay recalls her own educational experiences, in which ‘feeling stupid’ was a normal part of the dyslexic child experience.

As the pandemic has interrupted the education of almost every child in the UK, will swathes more children ‘feel stupid’?

She is co-editing ‘(Neuro)Divergent Textualities’, a collection of essays that aims to define neurodivergent literary scholarship and her book, ‘Unwriting Victorian Illiteracies’ is coming soon.

A woman, 16 weeks pregnant, goes to hospital for an ultrasound scan.

Coronavirus pandemic restrictions in England in 2021 dictate that the woman attends alone.

In the scanning room, she takes out her phone to record for her partner, the ultrasonic image of their baby.

‘That’s illegal,’ says the technician, ‘women may not record during the ultrasound’.

How does hearing a foetal heartbeat make a pregnant woman feel?

How might the muffled static of a stilled heart, shape her grief?

This programme explores maternal love and loss and compares the language used by obstetricians with depictions by writers including:

Sabina is a consultant child and adolescent psychiatrist and a writer.

She read medicine at St Bartholomew’s Hospital, London and went on to train in psychiatry at Guy’s and St Thomas’ hospitals.

She undertook further specialist training in child and adolescent psychiatry at the Maudsley Hospital, London.

She has published six books and is at the University of East Anglia in the School of Literature, Drama and Creative Writing researching:

She is writing a memoir, Flesh and Blood, about her experience of recurrent miscarriage while working as a medical expert witness in the family court.

Race, class and the ‘Che Guevara of Bolton’

Shirin will make a programme about the ‘Che Guevara of Bolton’, as Pravin Parmar is known by his friends.

Pravin moved from Kenya to Bolton as a child.

Pravin got a job at the Bulmer and Lumb mill spinning coloured yarns on the night shift, where the workforce was predominantly Asian.

Unlike the daytime workers, the night workers were refused over-time pay and forced to work bank-holidays.

In May 1978 Pravin Parmar led a walk out of the night workers, calling for higher wages, respect, and equality.

As Pravin Parmar remembers, the anti-racist slogan of the movement ‘here to stay, here to fight’ was played out in their workplace and transformed Britain forever.

Dr Shirin Hirsch is a historian based jointly at Manchester Metropolitan University and the People’s History Museum where she researches race, migration, and the labour movement in modern British history.

Her new project focuses on the ‘colour bar’ and its impact on figures such as the boxer Len Johnson and she has published a book ‘In the Shadow of Enoch Powell: Race, locality and resistance’.

Love on the streets of London

Two bed-fellows, arrested for begging in 1851.

Each of these couples was concealing a different secret.

In his essay, Oskar Jensen looks at trial accounts and newspaper reports and explores what these couples had in common: they survived by the strength of their loving relationships.

On the Victorian street, these relationships, queer, mixed-race, surrogate, were accepted.

In the courtroom, they were intolerable.

Dr Oskar Jensen is a Senior Research Associate in the School of Politics, Philosophy, Language and Communication Studies at the University of East Anglia.

He is working on a study of English protest song from 1600 to the present day.

He has published two Viking age novels for children and his first trade history book ‘Vagabonds’ is published this June.

His last academic monograph was ‘The Ballad-Singer in Georgian and Victorian London’, and his next major research project, from 2022, will be on mainstream song, class, and culture, 1520 to 2020.

The African origins of modernism

Solomon Plaatje sits at his desk in 43 Tavistock Square, Bloomsbury, four years before the Woolfs move into number 52.

He is the first Black African to write a novel in English.

It is the modernist masterpiece: Mhudi.

Yet Plaatje’s pioneering modernism has long been overshadowed by the European and American modernists who came later, such as:

In her essay, Jade Munslow Ong will explore the roles played by South African writers Olive Schreiner, HIE Dhlomo, Roy Campbell and William Plomer in the development of literary modernism.

Dr Jade Munslow Ong lectures in English literature at the University of Salford, specialising in:

She is principal investigator on the AHRC-funded project, South African Modernism 1880 to 2020.

She is currently working on a co-authored book with Matthew Whittle entitled ‘Global Literature and the Environment: Twenty-First Century Perspectives’.

Splish, splash, splosh: the sound of the sea

When Charles Babbage, father of the computer, looked to the sea he imagined its churning waves storing sounds and broadcasting them back.

When Victorian poet Algernon Charles Swinburne stood upon Cornish cliffs, he heard in the crashing waves the sounds of an Arthurian battle, an echo from 400 years before.

Joan Passey’s essay considers our relationship with water, from coastal foghorns to the ‘dead zones’ where sound fails to travel, to the noise pollution destroying ecosystems.

She has published ‘Cornish Horrors: Tales from the Land’s End in the British Libraries Tales of the Weird’ series and her first monograph, ‘Cornish Gothic’, is under contract.

She is a lecturer in the English department at the University of Bristol.

How did soil, one of the foundations of life on Earth, come to be seen also as dirt?

Jim’s essay introduces us to luminaries of Victorian thought:

How do these ideas link with the ‘blood and soil’ politics we have seen resurgent in the USA and India?

Dr Jim Scown researches the links between literature and science in the school of English, Communication and Philosophy at Cardiff University.

He is an Honorary Research Fellow at Cardiff University and a Senior Researcher at the Food, Farming and Countryside Commission.

Can the French Revolution (1789 to 1799), and its often-difficult relationship between democracy, freedom of speech, and censorship, help us explore ideas about censorship today?

In her essay, Clare Siviter uses the French Revolution to ask whether free speech should stop when other people feel offended, when it becomes libel, or when it leads to violence?

After 1789, in the absence of old censors, new ones sprung up, tearing down statues, halting plays, and burning symbols.

Siviter looks at what led to positive change, but also what, with the benefit of hindsight, would we do well to avoid.

Dr Clare Siviter is Senior Lecturer in French Theatre and Performance at the University of Bristol.

She has written on ‘Tragedy and Nation in the Age of Napoleon’.

Clare has been selected as a Franco British Young Leader and elected as a fellow of the Royal Historical Society.

She is a member of the editorial board for Modern and Contemporary France.

She has a Leverhulme Research Fellowship 2020 to 2022 to undertake her work on ‘Censorship and Subjectivity in the Age of Revolution, 1788 to 1818’.

A family of witches

In 1613, a mother and daughter were hanged for witchcraft.

The pamphlets published to celebrate their deaths focused on the way the two women lived, in an all-female household, without a male authority figure or the legal and religious structure of marriage.

Emma Whipday’s essay explores how this non-nuclear family was represented as dangerous, as much of a threat to the social order as the witchcraft these women were supposed to have committed.

It was produced by the American Shakespeare Center (ASC), for whom she has also written two Jane Austen adaptations.

She is Lecturer in Renaissance Literature at Newcastle University.