Black holes of all sizes in new gravitational wave catalogue 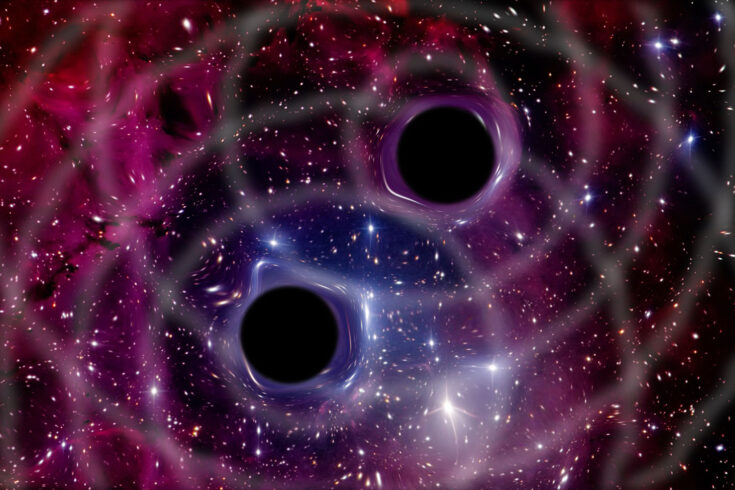 The largest catalogue of gravitational wave events ever has been released today, with dozens of ripples in space time captured by a global network of detectors.

The aftershocks of huge astronomical events were picked up by a world-wide team of scientists, with leadership from the UK.

The team has detected a further 35 gravitational wave events, detailed in today’s paper, bringing the total number of observed events since detection began to 90.

The catalogue updates the list of all gravitational-wave events observed to date with events observed between November 2019 and March 2020, using international detectors:

Scientists from 12 different universities across the UK are involved in the LIGO scientific collaboration, with many taking leading roles from detector calibration to data analysis.

The UK’s contribution to the collaborations is funded by the Science and Technology Facilities Council (STFC).

What did we see?

Of the 35 events detected, 32 of those were most likely to be black hole mergers, two black holes spiralling around each other and finally joining together. This event emits a burst of gravitational waves.

Several of the black holes formed from these mergers exceed 100 times the mass of our Sun, and are classed as intermediate-mass black holes. This type of black hole has long been theorised by astrophysicists, and has now been proven to exist thanks to gravitational wave observations.

Two of the 35 events spotted were likely to be neutron stars and black holes merging. This is a much rarer event, and one that was only discovered in the most recent observing run of LIGO and Virgo.

The masses of black holes and neutron stars are key clues to how massive stars live their lives and die in supernova explosions.

Christopher Berry, a Lecturer at the University of Glasgow, explains:

Only now are we starting to appreciate the wonderful diversity of black holes and neutron stars. Our latest results prove that they come in many sizes and combinations, we have solved some long-standing mysteries, but uncovered some new puzzles too. Using these observations, we are closer to unlocking the mysteries of how stars, the building blocks of our Universe, evolve.

Since the first gravitational wave detection in 2015, the frequency of detections has risen at a thundering rate. In a matter of years, scientists have gone from observing vibrations in the fabric of the universe for the first time, to now observing many events every month, and even multiple events on one day.

To achieve this monumental progress, the pioneering instruments have been getting more sensitive thanks to a programme of constant upgrades and maintenance. In the third observing run, the gravitational wave detectors reached their best ever performance, as the lasers were tuned to even higher power.

The many new detections in the third observing run were made possible due to some improvements to the already impressively sensitive detectors, such as the implementation of the quantum technology of squeezed light and the use of higher laser power.

Several other improvements also helped, like the reduction of stray light with many new baffles and improved optical coatings on the mirrors that reflect the laser beams.

Eyes on the skies

As the rate of gravitational wave detections increases, scientists have also improved their analytical techniques to ensure the high accuracy of results. The growing catalogue of observations will enable astrophysicists to study the properties of black holes and neutron stars with unprecedented precision.

Gareth Cabourn Davies, a research fellow at the University of Portsmouth, said:

As we learn more about the compact binary coalescences, our searches are becoming more and more sensitive to signals.

Where before we were searching in the dark for a needle in the haystack, the improvements in detector sensitivity and our search algorithms mean that now we’ve turned on the lights and have a metal detector. So it’s really exciting to see all the different, more unusual systems we can find.

The future of the field

The LIGO and Virgo observatories are currently undergoing improvement works before the upcoming fourth observing run, expected to begin next summer.

The Kamioka Gravitational-Wave Detector (KAGRA) observatory in Japan will also join the next full observing run. Located deep under a mountain, KAGRA completed a successful first observing run in 2020, but has yet to join LIGO and Virgo in making joint observations.

With more detectors, potential events can be located more accurately. As more detections are confidently added to the gravitational wave catalogue, researchers are learning more and more about these astronomical phenomena.

Before the next observing run, scientists will be busy further analysing the existing information. They will be learning more about neutron stars and black holes, and searching for new types of signals hidden in the data.

The UK has taken a leading role in pursuing gravitational wave research, from helping to design and build the detectors to searching the universe for signals.

The LIGO scientific collaboration comprises over 1,400 scientists from 19 countries, and includes researchers from 12 UK universities: