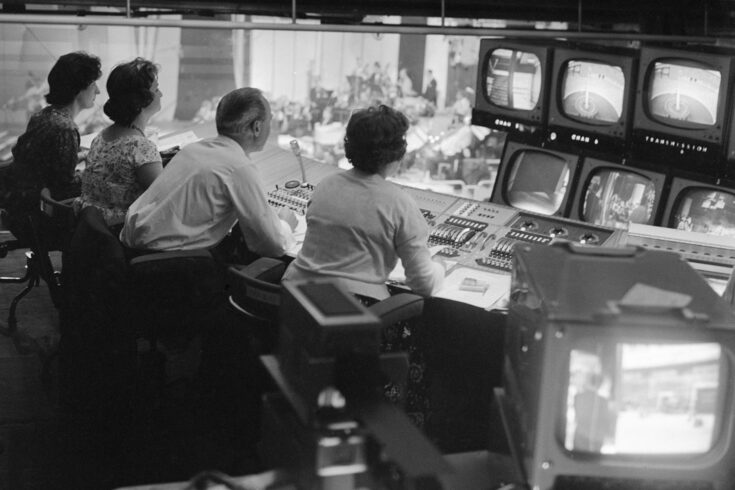 The programme of activity connects the public with research about the past, present, and future of broadcast media.

To mark the centenary of the BBC this year, the Arts and Humanities Research Council (AHRC) is launching a dynamic programme of public engagement activities.

This programme will create new dialogue between researchers, the BBC and the public and will explore a wide range of topics, including:

Building on the long-standing BBC and AHRC partnership, which also includes the New Generation Thinkers scheme, the programme will run across the centenary year.

Community connections with the BBC

Seven new projects will directly involve public participants from across the UK to examine, explore and articulate their connection with the BBC.

The funded public engagement activities, which are in collaboration with the BBC, explore a range of themes, including:

The programme is delivered in partnership with the BBC and the National Science and Media Museum in Bradford.

A full list of projects funded through this programme can be found in the further information section.

Rethinking the BBC’s relationship to social change in the 1960s

Marcus’s work focuses on the 1960s, a decade popularly thought to have marked a turning point for both broadcaster and nation.

The fellowship rethinks the BBC’s relationship to social change in the 1960s, through activities developed in collaboration with a range of partners.

Working with innovative theatre groups, such as Tamasha, Homo Promos and Collective Encounters, this work will explore how communities have been represented by the BBC, then and now. Other activities include:

Find out more about Marcus’s fellowship on the AHRC blog.

Reflecting on the past and shaping the future

We are pleased to be marking the BBC’s centenary year with an exciting programme of engagement with research.

Reflecting on 100 years of the BBC not only offers insights into the history of broadcasting, but also the cultural and social change of Britain over the past century.

These exciting projects will engage the public with research in new and dynamic ways, reflecting on the past but also shaping ideas for the future.

In our centenary year, we are delighted to be collaborating with AHRC to explore in depth new and different stories across the BBC’s rich history.

We also share AHRC’s commitment to giving these revelatory narratives back to the communities they come from via dynamic public engagement which will, we hope, continue the conversation well into the future.

Further programming later in the year

In addition, AHRC are partnering with the Being Human festival on a special BBC Centenary Hub led by the University of Bradford.

AHRC is also working with XR Stories, part of the UK Research and Innovation (UKRI)-AHRC creative industries clusters programme. This partnership will deliver an engagement programme that explores the future of broadcasting and the potential of immersive and interactive storytelling.

Further information on these initiatives will be shared later in the year.

This project builds upon existing research developed through the Make Film History project to offer young filmmakers access to 150 films from BBC Archive for creative reuse in short film projects.

The themes of the archive films include:

50 young filmmakers across the UK will create short films in response to this BBC collection, which uncover the forgotten histories of underrepresented communities.

Participants will receive mentoring from a professional filmmaker and an opportunity to showcase their film via local public screenings and BBC platforms.

‘Strictly’ inclusive: co-creating the past, present and future

This project involves the public with research about BBC’s cutting-edge work in televising dance, focusing on Strictly Come Dancing.

The project will draw on research expertise at Coventry University’s Centre for Dance Research and other partners.

It will utilise BBC archive analysis and public engagement activities to better understand the impact of the programme on audiences.

It will explore how Strictly has addressed inclusion and representation of:

This project will engage dance enthusiasts from disabled and LGBT+ communities in the Midlands to reflect on televised dance, potentially influencing future programming.

Reclaiming a lost past: Black British women, visibility and the BBC

Aasiya Lodhi (University of Westminster) in partnership with BBC History, Young Vic Theatre, The Feminist Library and Letter to a Black Girl.

This project encourages public engagement with the overlooked histories of Black British women through a focus on the struggle for representation in BBC programming from the 1960s onwards.

It seeks to highlight and question the role of media visibility in promoting or obscuring the contribution of Black feminist activists and Black actresses to mainstream British culture and society. It will do this via a range of participant-driven activities.

Drawing on BBC archives, the engagement activities will include:

Make yourself at home (MY-HOME): co-curating the South Asian community experience at Southampton

Dr Pritipuspa Mishra (University of Southampton) in partnership with BBC History and the John Hansard Gallery.

This intergenerational public engagement project tracks the initial reception and legacy of MY-HOME.

This was the BBC’s first television and radio programme aimed at new migrants from South Asia.

It aims to illustrate the long-term history of the BBC’s role in making immigrants at home in the city of Southampton.

Working with the South Asian community in Southampton, this project explores how this programme, and others, contributed to the construction of South Asian diasporic identity in the UK.

The engagement activities include:

Hearing our stories: LGBTQ+ lives and the BBC

This project aims to learn how BBC coverage of LGBTQ+ lives has been viewed and understood by the LGBTQ+ audience.

It investigates what impact the BBC has had in its representation of queer lives, in framing debates and reflecting the changing experiences and identities of this marginalised group.

The project engages with LGBTQ+ community partners, to analyse the impact of the BBC’s portrayal of key events over the past 50 years. From the gay and lesbian liberation movement to marriage equality.

Outputs will include a short series of podcasts and a presentation drawing on BBC archive material.

Alice Watson (University of Oxford) in partnership with BBC History.

This project aims to co-produce with audiences a special podcast series that illuminates the cultural impact of Call the Midwife.

Call the Midwife is one of the BBC’s most watched and celebrated dramas exploring Britain’s medical and social history.

Each of the 15 episodes will record two viewers in conversation who reflect on and share personal experiences of a storyline from the show, such as:

By asking audiences ‘what does Call the Midwife mean to you?’, the podcast will produce new and diverse storytelling. It will elicit untold local stories and intergenerational conversations inspired by watching the drama.

The ‘postscripts’ were a series of short BBC radio broadcasts made by Bradford-born writer J B Priestley during World War Two which offered personal portraits of events large and small.

This project will develop a new set of ‘postscripts’ for BBC Sounds and local BBC radio.

These will be inspired by Priestley’s original broadcasts but with a diverse range of voices and providing fresh takes on British cultural history and the British landscape.

This project will harness the form, content and spirit of the postscripts and the links between Priestley and the city of Bradford to tell new stories about the world we inhabit.