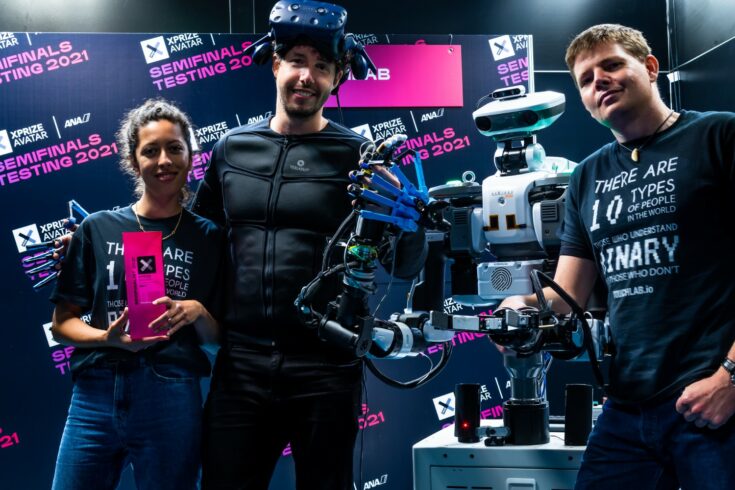 A Scottish start-up at the Higgs Centre for Innovation, has raised £3.5 million to give robots a sense of a touch.

The biggest remaining challenge to mass robot adoption is their inability to feel the world around them.

Now, at the Science and Technology Facilities Council (STFC)’s Higgs Centre for Innovation, Touchlab is solving this challenge by developing an ‘e-skin’.

An e-skin is a sensing skin that gives robots the power of human touch.

Thinner than human skin, this e-skin can be wrapped around robots to sense, in real-time:

It enables a robot to:

It can also sense direction in 3D, and withstand extreme environments, such as acid, high and low temperatures, even radioactive environments, giving it unique ‘superhuman’ capabilities.

This technology is exceptionally versatile, with applications in nearly any robotics field.

These include the ability to operate remotely in environments too hazardous for humans, and in the medical sector to reduce the transmission of healthcare-acquired infections.

The final frontier for robots

Touch is the final frontier for robot interaction and entry into physical environments, enabling true dexterity and safety.

We have taken on this challenge by developing a retrofittable e-skin that gathers the data, software to make sense of it, and integration to ensure it works in demanding applications, from grocery grasping to telerobotics in extreme environments.

Our location at the Higgs Centre for Innovation has helped us meet this challenge.

Touchlab located to the STFC’s Higgs Centre for Innovation, at the Royal Observatory in Edinburgh, in 2019.

It initially joined as part of STFC’s business incubation programme, designed to support technology start-ups in their mission to:

Two and a half years on, it remains as a tenant at the Higgs Centre, with access to:

Locating to the Higgs Centre meant that Touchlab could test and refine its technologies, explore markets and prepare for commercialisation.

Amongst other things, our location at the Higgs Centre meant that we could test our sensors in harsher environments.

For example, we used the cryogenic facilities to test our tech in low temperatures, and we used advanced vibration shakers to test how it responds to different levels of vibration.

For us, the perfect combination of business support and access to specialist knowledge and tech facilities has been a game-changer.

Touchlab is an outstanding example of a pioneering start-up whose technology could have incredible benefits for our society and economy.

I sincerely congratulate Touchlab on its funding success, which is a major boost for the far-reaching potential of this technology.

Through access to the right technologies, skills, business support and funding, this is exactly the kind of thing that STFC, via the Higgs Centre for Innovation, sets out to help early-stage companies achieve.

It’s been fantastic to support Touchlab during its early stages, and I look forward to following its future successes.

The investment was led by Octopus Ventures, one of Europe’s largest and most active early-stage investors, with participation from existing investors, including Creator Fund and Techstart Ventures.

Touchlab will use the funding to grow its commercial and technical teams to take the business forward into its next stages of development.

Find out more about the Higgs Centre for Innovation.

Find out how STFC can support your business.

Find out more about Touchlab.