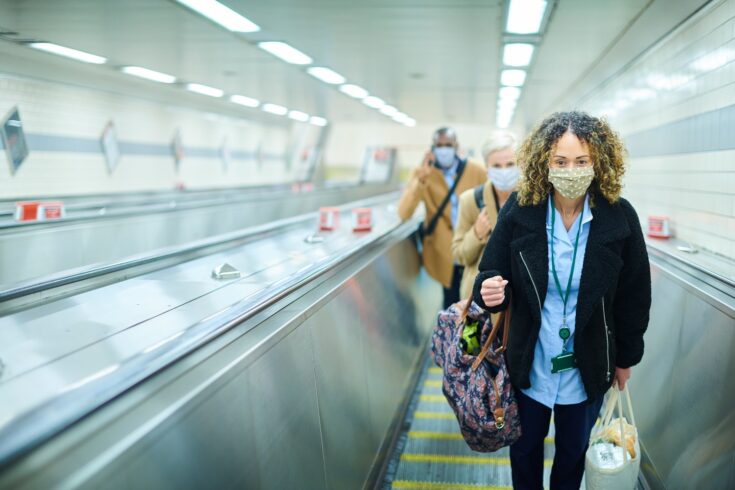 Viruses evolve over time, so from the arrival of the pandemic, researchers around the world were watching the new coronavirus for any changes.

By January 2022, the World Health Organisation had identified five variants of concern:

Researchers funded by UK Research and Innovation (UKRI) explain how this is typical virus behaviour, and why we must be vigilant about the new variants.

When a virus infects a cell it begins making copies of itself and replicates its genetic information.

The COVID-19 virus is encoded in an RNA molecule and, while it does have some ‘proof reading’ enzymes to help it copy correctly, it is prone to error.

We need to monitor for variants and consider each mutation to decide if they are worrying based on everything that we know so far.

The difficulty is that mutations arise all the time.

Most of them are not worrisome, but particularly early on, spotting mutations that could be linked to a change in the way that the virus behaved and interacted with us was like finding a needle in a haystack.

Professor Peacock pointed to the characteristics of new variants, and how they affect how the virus spreads:

Omicron has mutations that in other variants have been associated with increased transmissibility and partial immune system evasion.

Evidence so far points to greater transmissibility than Delta, but our understanding is limited, and urgent studies are underway to confirm this and to understand more about immunity and disease severity.

How did we find the first variant?

The alpha variant came to light in late November 2020.

Public Health England (PHE) was investigating why infection rates in Kent weren’t falling despite lockdown and other restrictions.

Backwards tracing using the genetic evidence suggested the variant emerged in September 2020 and circulated at low levels until mid-November.

After PHE’s Kent investigations, a cluster of infections linked to the new variant was found spreading rapidly into London and Essex.

The new variant transmitted more easily than the previous one, and early evidence indicated that it could be linked to increased risk of death.

How do we track new variants?

The COG-UK Consortium, which was formed in response to the pandemic and co-funded by UKRI, is tracking how the virus mutates.

COG-UK is undertaking random genomic sequencing of positive COVID-19 samples from across the UK, and publishing the data online.

It has developed software to automatically analyse genomes for the presence of mutations, to track them over time and how they spread.

This massive sequencing effort has put the UK at the forefront of sequencing the virus.

The UK has now generated more than one million sequences.

Pathogen surveillance through genome sequencing is vitally important, particularly so during a global pandemic.

This resource was invaluable for researchers in the field as a tool for future surveillance and outbreak investigations.

Read about how the UK became a leader in genomic surveillance.

The biggest concern is any change that could lead to an increase in reinfections or vaccine failure.

G2P-UK launched in early January 2021 with £2.5 million funding from UKRI.

The national research project will study the effects of emerging SARS-CoV-2 mutations and flag the riskiest strains as they arise.

It is studying how mutations in the virus affect key outcomes such as:

Find out about the G2P-UK launch.

UKRI continues to invest in new vaccine science and technology to fight COVID-19.

Innovate UK funded Scancell, a spinout company from the University of Nottingham, to take its proposed DNA vaccine to clinical trial.

Scancell plans to adapt its proven technology, which has been used to treat people with cancer, to produce a COVID-19 vaccine that is:

Scancell has now started its phase one clinical trial in South Africa.

Two potential vaccines are being trialled; both induce antibody and T-cell responses against the original virus and its variants.

Data from the clinical trial is expected by June 2022.

This critical research, funded by the taxpayer through UKRI, builds on decades of investment into genomics research and will inform government decision making on a daily basis.

Get a regular round-up of all our COVID-19 news and articles.