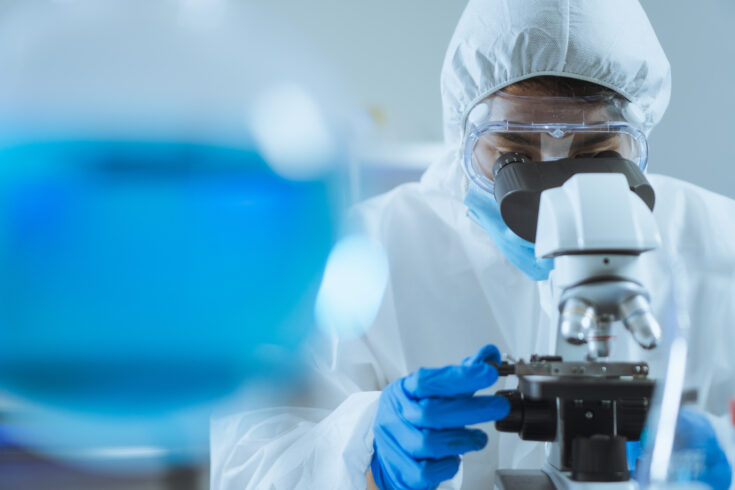 Researchers at the Wellcome MRC Cambridge Stem Cell Institute use single-cell analysis to understand more about how COVID-19 interacts with the immune system.

In March 2020, research labs around the UK began to shut down as COVID-19 took hold. However, Professor Berthold Göttgens and his team knew that they could play an important role in furthering our understanding of the strange new disease that was sweeping the world.

Before the pandemic, Göttgens had been a contributor to the Human Cell Atlas, which is a global collaborative project aiming to map the molecular makeup of every type of cell in the human body. The project is supported by many international funders and charities, including:

Over the past couple of years, he and his team have been using cutting-edge technology to study individual healthy blood and immune cells in minute detail. This includes analysing patterns of gene activity and protein molecules on the cell surface.

It was obvious that only essential research should be done during lockdown, so we refocused on working with our immunology colleagues and collaborators to learn as much as possible, as quickly as possible about COVID-19.

One of the biggest questions was why the disease affects people so differently, with some becoming severely ill or dying and others not having any symptoms at all. We realised that we had particularly powerful tools at our disposal to look in depth at the cells in the immune system to try and find out why.

Pulling together a plan

In search of answers, Göttgens quickly devised a plan with his collaborators:

They teamed up with Professor Ken Smith, Cambridge University, who had initiated the collection of blood samples from patients who were admitted to hospital with severe COVID-19, and samples from people who were only mildly affected or had no symptoms at all (asymptomatic).

This was to see whether there were any differences in their immune cells that might explain the varying responses to COVID-19.

Key to the success of the project was the fact that hospitals like Addenbrooke’s, in Cambridge, were carrying out regular COVID-19 testing of staff. This was at a time when widespread testing for the general public wasn’t available, enabling them to recruit people with mild or no symptoms who might never have otherwise been identified.

Once the process was in place to recruit participants, the next challenge was figuring out how to handle samples safely and analyse them in a consistent way across all the study sites.

We were used to dealing with healthy blood, and at the time, we had no idea how infectious blood from people with COVID-19 might be, although we now know there is hardly any COVID-19 in human blood.

To make it harder, we were trying to do all of this during the UK’s most stringent lockdown, when sourcing reagents for the experiments was very difficult. The most gratifying thing was how everybody pulled together with a really good spirit – that was one of the few things that kept me going during that time.

From single cells to vital insights

Less than four weeks after first coming up with the idea for the project, the first samples were ready for processing.

In total, the research team looked at around 800,000 individual immune cells from 130 people with COVID-19:

By the end of July, the team had amassed more than a billion pieces of data. These then had to be analysed, taking a further six months.

Published first as a preprint in January 2021 and then in the prestigious journal Nature Medicine in April, the results revealed key differences in many types of immune cells that mapped onto how ill people got from COVID-19.

People with no symptoms had higher levels of a specific type of antibody-producing B-cells. These act as a first line of defence against the virus, compared with those who became seriously ill. And while patients with mild or moderate symptoms had high levels of infection-fighting B- and T-cells, these cells were missing in those with severe COVID-19, suggesting that this part of the immune response wasn’t working properly.

Conversely, patients who ended up being hospitalised with the disease had unusually high levels of killer T-cells and monocytes, which can trigger potentially life-threatening inflammation in the lungs.

For Göttgens, the most interesting observations were around blood clotting, a serious complication of COVID-19 infection that can cause strokes and other problems.

We saw that people with severe COVID-19 had higher levels of platelet-producing cells, which help blood to clot.

This latest study has been a huge collaborative project, involving more than 60 researchers in several institutions as part of the UK Coronavirus Immunology Consortium, which is a major collaborative project funded by UKRI and the National Institute of Health Research (NIHR) aiming to diagnose, treat and prevent COVID-19 by understanding more about how it interacts with the immune system.

UKRI funding has also been fundamental to the success of the Human Cell Atlas. It has provided nearly £7 million Strategic Priorities Fund investment to support the initiative, with a contribution from the British Heart Foundation (BHF) and led by the MRC.

Holger Apitz, Programme Manager for Cell and Developmental Biology at the MRC states:

This study is a great example of the benefits that the Human Cell Atlas can bring.

By supporting the underlying infrastructure, including specifically for single cell genomics in our clinical research infrastructure call in 2015, we’ve enabled researchers to develop and optimise single cell technology. While also, bringing together an international network of collaborators to share knowledge and expertise, creating a platform from which the team could respond in an agile and quick way to an emerging health crisis.

It’s not just about the technology. Every high-tech lab machine relies on skilled researchers to carry out the experiments and analyse the data coming out of it.

This kind of large-scale research doesn’t come out of nowhere – we need people with a diverse set of skills across computational biology, genomics, haematology, virology and more.

The MRC has really helped by building capacity and capability by nurturing a community of single cell researchers, supporting their training and fostering national and international collaborations that are essential for success.

The original Human Cell Atlas was designed to map all the cells in healthy tissues. This project demonstrates the value of applying the same methods to study single cells in disease in order to build up a picture of what exactly has gone wrong down at the molecular level.

The project is a really good demonstration of how single cell analysis is going to be a new way of interpreting disease through this high-resolution, deep-level information.

It’s not the answer to absolutely everything in biology, but I think that in less than five years people will be saying, ‘Why don’t you do this with single cell analysis?’ Our study has turbo-charged the idea behind this approach – not just in the UK but for our international collaborators working on the Human Cell Atlas and other single cell projects.