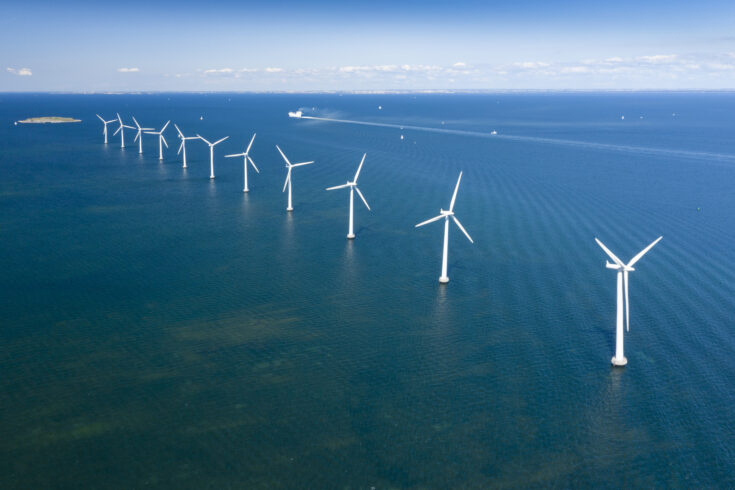 The UK government wants offshore wind to power every home in the UK by 2030. The UK is a world leader in offshore wind energy. UKRI researchers are helping deliver this ambitious target.

As anyone planning a staycation can attest, the British Isles are very windy. In fact, the UK has the greatest wind energy potential in Europe. However, despite that, wind power contributes only a relatively small amount of our energy needs.

We will have to increase that power output significantly if we are to meet the UK government’s target of reaching net zero greenhouse gas emissions by 2050.

The biggest potential comes from offshore wind energy, as higher wind speeds out at sea allow more energy to be generated.

The UK is presently the global leader in offshore wind energy. It has more capacity installed than any other country, with offshore wind powering over 7.5 million homes. In the third quarter of 2019, offshore turbines contributed around 10% of the UK’s power.

A planned fourfold increase by 2030 will generate more electricity than is currently used in UK homes.

Many technological hurdles remain, including:

It’s also vital that wind farms do not damage the environment, and have the support of local communities.

Some of the UK’s leading scientists are working on solutions to these challenges, creating the right conditions for Britain to become a global leader in wind technology. The sector:

So far, the hub has awarded almost £3 million to 30 projects addressing various offshore renewable engineering challenges. Amongst other things, the projects will:

Training the next generation of scientists

To exploit the UK’s wind power, the British workforce needs the necessary skills to meet the needs of the fast-growing offshore wind energy industry. The Engineering and Physical Sciences Research Council (EPSRC) Centre for Doctoral Training in Wind and Marine Energy Systems aims to do just this.

The centre offers the UK’s only comprehensive doctoral training programme in wind and marine energy. It brings together:

The overall aim of the Research Centre is to by providing high calibre PhD graduates with the specialist, generic and leadership skills necessary. They would then lead future developments in wind and marine energy system.

While seas and oceans cover about 70% of the Earth’s surface, currently offshore turbines can only be used in shallow water depths of up to 30 metres. While it may be possible to extend this to 50 metres, beyond that it becomes difficult to fix turbines to the seabed.

However, there are huge engineering challenges. The turbines are big, rotating machines, and while floating platforms have long been used by the oil and gas industry, the technology cannot be transferred directly to wind generation.

This problem has been the focus of the UK and China Centre for Offshore Renewable Energy (UK and CHN CORE). The CORE research programme looked at the viability of floating offshore systems, which models ways in which existing small platforms could be scaled up and used in actual offshore environments.

Before floating windfarms can be deployed in the sea, physical modelling is necessary. The University of Plymouth recently received a £1 million grant from EPSRC. This is to build the UK’s first Floating Offshore Wind Turbine Test facility, which will allow scientists to test innovations in floating offshore wind technology.

The facility will allow scientists to conduct modelling experiments in the controlled environment of a laboratory. It will improve our understanding of how floating windfarms could be impacted by atmospheric conditions amongst other things.

It will be housed inside the COAST Lab. This is already used to test a range of offshore renewable energy devices to see how they are impacted by waves and currents.

If we are to meet the UK government’s targets of net zero emissions by 2050, we need large offshore wind farms to operate as efficiently and reliably as possible.

One of the main challenges preventing large wind farms from operating at maximum efficiency comes from the wake effect. As turbines extract energy from the wind, they can cast a kind of wind ‘shadow’ behind them where wind speed is reduced and turbulent. This slows other turbines down, creating a domino like effect and hampering power output.

The MAXimizing wind Farm Aerodynamic Resource via advanced Modelling (MAXFARM) project used advanced computer modelling and the latest in wind-tunnel simulation technology. This is to understand the impact of wind flow on offshore wind farms.

Led by Dr Philip Hancock, a reader in fluid mechanics at the University of Surrey, the team simulated a range of conditions and investigated their impact on turbines.

The models developed by the team could be used by wind farm developers to accurately assess wind flow onsite. This information could then feed into the design and layout of turbines to maximise output and minimise cost.

The models could similarly be used by wind farm operators to keep maintenance costs low. This is at the same time as maximising the amount of power supplied to the grid at any one time. Ultimately this would increase the reliability of large-scale UK wind energy, while reducing costs.

It is vital that offshore wind farms do not adversely affect the local environment or biodiversity.

One key issue is the impact of offshore windfarms on local water flow and sediment transport, which can affect coastal flooding and shoreline erosion.

The 25-turbine Burbo Bank Offshore Wind Farm in Liverpool Bay stands close to a coastline especially vulnerable to sediment changes. Researchers from the National Oceanography Centre and the University of Liverpool used sophisticated software developed by EDF to simulate the wind farm’s effects on the local environment.

To do this, the team harnessed the power of Blue Joule, one of the top 30 supercomputers in the world. The computer is housed at the Science and Technology Facilities Council Hartree Centre. This is a high-performance computing, data analytics and artificial intelligence research facility.

Blue Joule enabled scientists to model the impact of individual wind turbines on a metre scale, and on timescales ranging from weeks to years.

Initial indications from the simulations show that the wind farm’s long-term contribution to large-scale sediment movement may be much greater than previously estimated. This highlights the potential need for mitigation measures in the future. The insights could aid the siting and construction of coastal defences and tidal or wave energy devices, as well as offshore wind farms.

Before installations can go ahead, offshore wind farm developers need to demonstrate that wind farms will not impact populations of local sea birds. The UK Centre for Ecology and Hydrology (UKCEH) has pioneered an approach that uses GPS to track individual birds in protected areas, such as the Isle of May off the east coast of Scotland.

As the GPS data reveals where the seabirds forage and breed, this location data can then be compared with the planned footprint of a proposed offshore wind farm.

Both of these tools are now used by regulators to ensure that proposed developments do not harm seabirds.