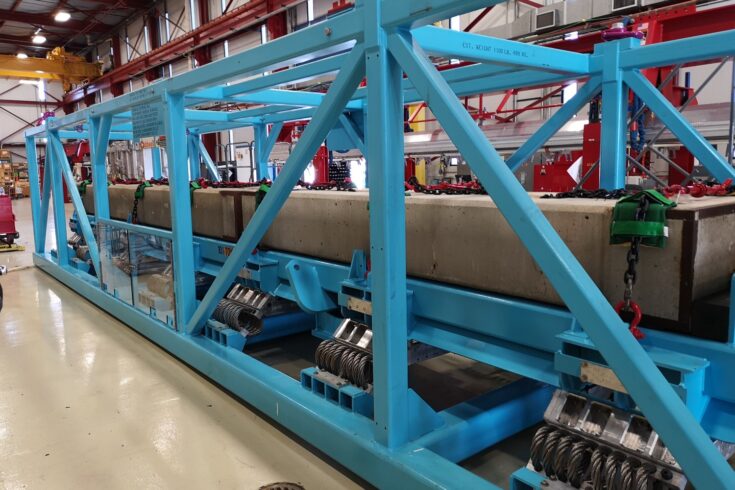 Daresbury Lab are building 3 cryomodules in collaboration with Fermilab, but how do we transport these from Daresbury all the way to Chicago?

Earlier this year I was in Chicago, Illinois to conduct a road test of the transport frame for the Proton Improvement Plan II (PIP-II) cryomodules.

A collaboration across 6 nations

The PIP-II project, hosted at Fermi National Accelerator Laboratory (Fermilab) in the US, is a collaboration between institutions across 6 nations, including the Science and Technology Facilities Council (STFC).

PIP-II is set to make an 800MeV linear accelerator, known as a linac, allowing a proton beam exceeding 1MW to be generated.

We at Daresbury Laboratory will be making 3 cryomodules for this project. However, transporting something like this is not as easy as booking 3 seats to Illinois and letting them go. And that is where I come in.

I was brought onto this project to design the transport frame that is required to safely ship 3 very fragile cryomodules, that have been in development since 2015, from Daresbury in the north-west of England, all the way to Illinois.

At STFC we have an excellent track record of creating frames and secure packaging for the long-distance delivery of fragile kit. Fermilab have also learnt from previous projects that the transportation system needs rigorous testing to ensure safe shipping.

When I started on this project in 2019 we already had a frame design, but it required some re-engineering due to changes in its requirements.

In collaboration with Fermilab, and incorporating lessons learnt from previous projects, we developed a new iteration of the frame. This transformed it into a load bearing structure from which the modules are lifted, rather than lifting through the cryomodule itself.

The frame carries the weight of the 10 metre long, 12 tonne modules, and has a suspension system to reduce the risk of damage during transit.

In December 2020 the final design was approved.

2 years later I went across to Chicago to test the frame for the prototype cryomodule.

A dummy load was made of concrete to be the same size and weight as the module that will be transported from Daresbury. It might seem odd to fill it with a lump of concrete, but by making this ‘stunt double’ as similar to an actual module as possible, we can stop any potential issues in their tracks before the precious cargo is loaded.

The visit was a particularly good experience as this was the first time seeing the design in the flesh since I joined STFC. The frame was loaded and placed onto a huge truck, which was then taken on a 3-hour road test on some of the roughest parts of the nearby highways.

Vibrational sensors were used to take data continuously during the trip. For the most part the data came back as expected, however there was an unexpected resonance above the specified limit.

After much debate, we retested the frame having removed 4 of the wire-ropes from the frame. There was little difference in the data and therefore it was concluded that the resonance was formed by the dummy loads, and the transport frame did not need to be changed.

The next step for us at Daresbury was to run a transatlantic transport test with Fermilab.

The transport frame, loaded with the dummy module, had been sent from Chicago to Luxembourg by air, and then driven to Daresbury via the Channel Tunnel.

There were many operations involved, however the greatest risk was the reversing manoeuvre into the Electron Hall here at the lab. If not planned correctly, the situation could descend into an Austin Powers style million-point turn scene, which, though perhaps comical, would not have been ideal.

This however was a success and we sent off the dummy load back to the US where it has been received safe and sound.

We have one last transport test next spring with a real cryomodule. We will then assemble the 3 cryomodules at Daresbury which will be sent to the US and installed in the PIP-II accelerator complex.

Once they arrive safely, it will be a job well done after a long hard road to get them there and we’ll already be working on the next science challenge.

Find out more about STFC’s role in creating PIP-II.

Top image:  The cryomodule frame with its dummy load on, in Chicago. Credit: Mitchell Kane