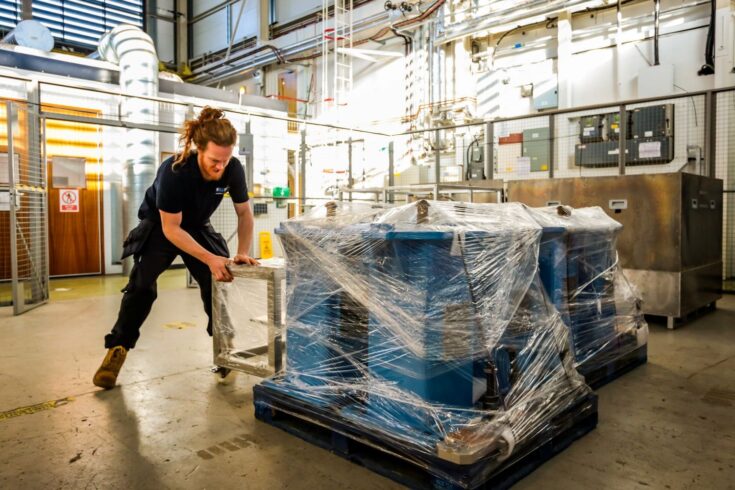 After seven years of work, the order of beam transport modules for the European Spallation Source (ESS) have been delivered and installed at the facility in Sweden.

If you had seen the large wooden crates being loaded onto a truck on a cool spring morning, you would be forgiven for thinking that they were quite non-descript. But that shipment, carefully planned and meticulously packaged, represented the final shipment of beam transport modules to the ESS which have been designed, built, tested and packaged by my friends and experts at Daresbury Laboratory over the last seven years.

ESS is one of the largest science and technology infrastructure projects being built in the world and is situated on the outskirts of Lund, Sweden. It is a high-power neutron spallation source which is being created by 40+ in-kind contributors with the aim of starting the scientific user programme in 2027.

The beam transport modules (BTMs) are just one of several in-kind work packages which STFC is undertaking on behalf of the UK.

What is a beam transport module?

The proton beam in the ESS will travel at almost the speed of light to create particles called neutrons, which can then be used for scientific and commercial research. That beam will navigate through the beam transport modules – which are sometimes called linac warm units (LWUs).

In total, STFC teams at Daresbury Laboratory have created 74 of these modules, which when placed together in the beam hall will measure 480m and make up 85% of the total accelerator length.

These modules also encompass magnets which control the size and direction of the beam, as well as diagnostic instruments which will allow people working on the beamline to investigate and control the beam when the accelerator is in action. The ESS team at STFC worked with magnet experts in Italy who supplied the large quadrupole magnets which can be seen on each module, and also with UK manufacturers for many of the elements needed to meet the high spec of the units.

Behind every great project is a great team

Getting every single module, not just this final consignment, safely shipped to Sweden has only been possible because of a hard-working team of experts. Working with me, there are design engineers, assembly technicians who built the unit and work hard to ensure they are constantly creating units at the highest standards, quality control engineers and vacuum lab engineers and technicians who ensured that the parts were uncontaminated and thoroughly tested.

Given not only the scale and complexity of this project but also the unexpected circumstances around the world since 2020, this delivery represents a fantastic achievement that everyone involved should take pride in.

ESS have regularly held the delivery of the project and quality of the work in high esteem – something which I put down to the attitude and workmanship of all the team involved. 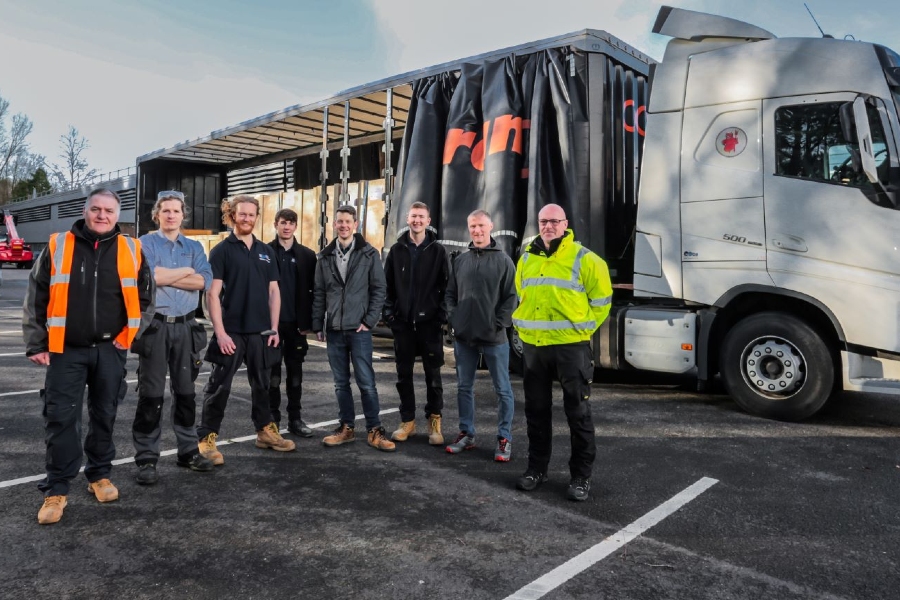 Members of the Daresbury Laboratory team on the day of the final shipment from the lab (credit: STFC)

From Daresbury to Sweden – in safe hands

First we had to ensure these units arrived in one piece. All the units were delivered on a dedicated truck using a custom built anti-vibration transportation frame designed (by us) to dampen the shocks of the truck as it drove to the ESS. The crate was also equipped with a GPS unit and multiple three axis shock logging accelerometers to give precise measurements of the vibrations incurred by the crate on the journey to Lund.

From this data we can track where the most vibrations took place, as well as analysing shocks such as loading and unloading, and which roads need better pothole management (looking at you A296). From this we ensured that the delicate parts of the modules did not get damaged in transit ensuring that the work done at Daresbury arrives in the best condition possible for integration into the accelerator. 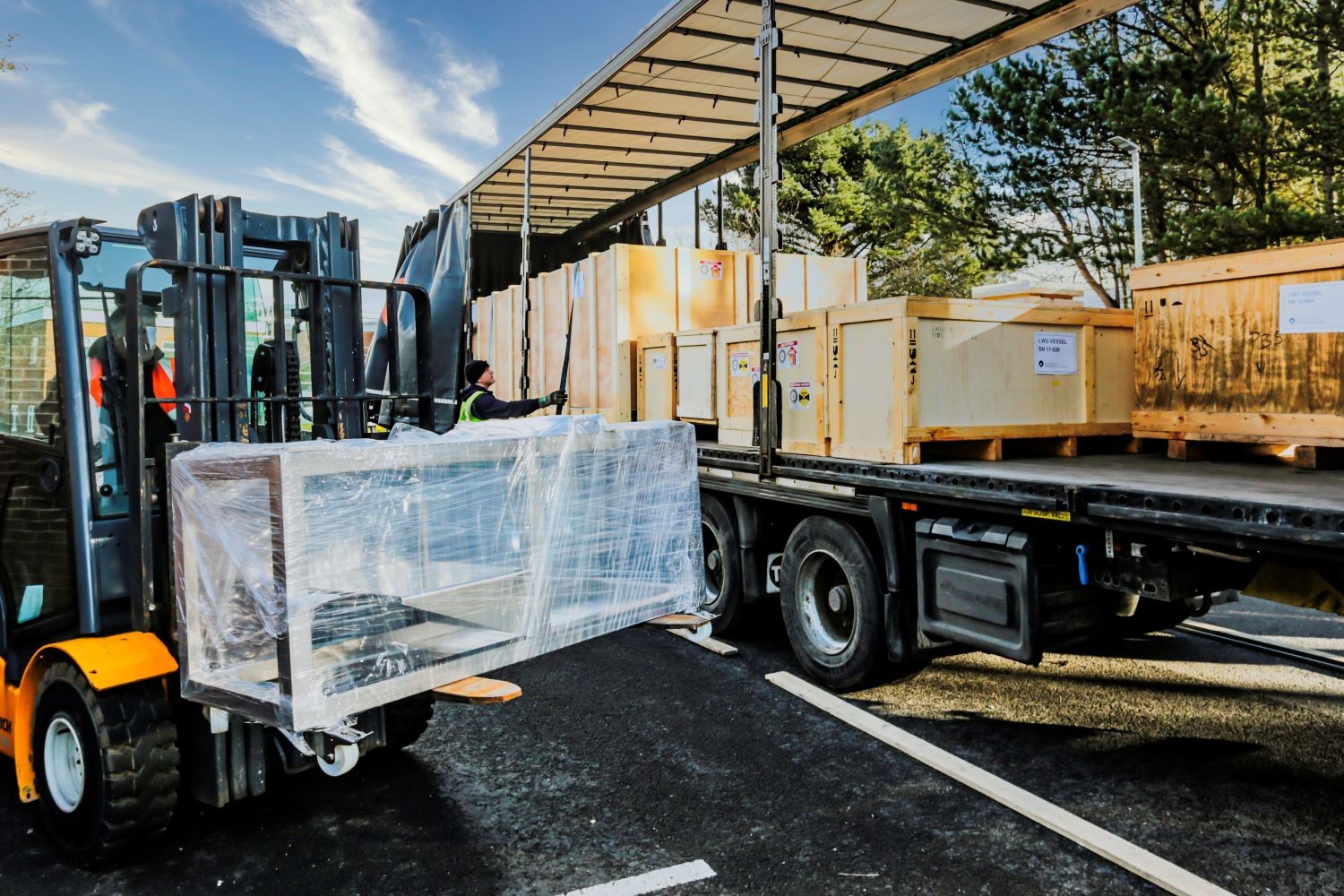 Loading the precious cargo, in its bespoke packing, ready for the road trip to Sweden (credit: STFC)

Once at ESS the installation team worked closely with STFC’s own team in ensuring that the units are connected to the rest of the accelerator without compromising the integrity of the particulate levels. Our current schedule puts us well ahead of the ESS installation requirements. Some of the team from Daresbury Laboratory recently went over to check their work in-situ and were pleased to see so much of their craftsmanship in the accelerator tunnel.

Unlike the 280m already delivered, where all the components were designed in-house, each in the final delivery contained components from at least three other in-kind contributors, meaning that this is a crucial time where we find out if all interfaces match up and that there have been no communication errors along the way!

Given that there are 15 variants of units, it will be another year before we’ve finally been able to confirm everything fits and we can start sleeping at night again. Many parts, from the vacuum vessels to the pedestals has been manufactured in the UK, which has provided a nice economic boost to UK vacuum technology companies and local manufacturing shops.

What does the ESS mean for you and me?

You might wonder what this giant piece of science infrastructure means for you and mean, and why projects like this are so important. When complete, the ESS will essentially act like a giant microscope – allowing for new insights in life sciences which could have huge impacts on medical research, materials research and much more for many years to come. I can’t wait until the science begins at the ESS and we can see the fruits of our labour in research coming from the facility.

Find out more about the ESS project