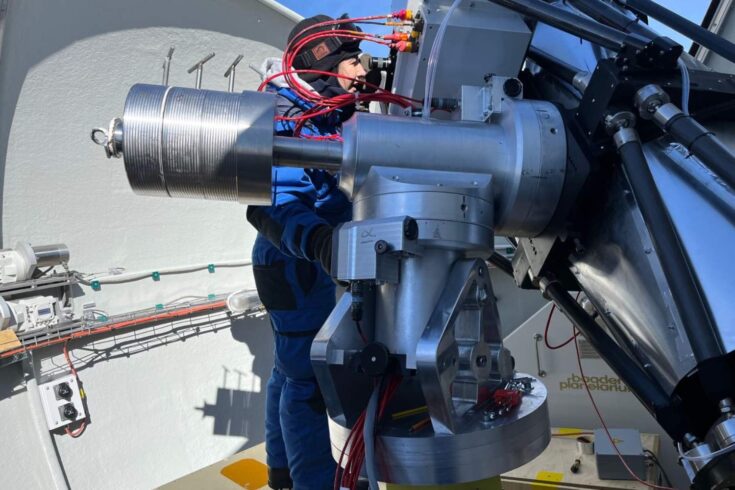 As a state-of-the-art camera takes its place on the Antarctic Search for Transiting ExoPlanets (ASTEP) telescope out in Antarctica, I reflect on my journey. 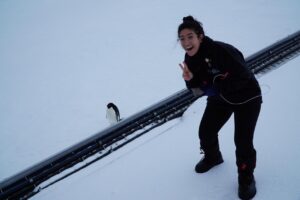 Georgina standing next to a penguin. Credit: University of Birmingham

My journey started on 17 November with a train from London to Paris to meet the group at their official departure point. It was here I first met some of my ASTEP colleagues (excluding those who had already journeyed over to Concordia). I also met others who would be joining us on the trip.

Our three days of travelling were rounded off with flights to Singapore and then on to Melbourne. The three-hour collective delays here were tame in comparison to what we would go on to experience. From Melbourne we flew to Hobart, Tasmania and to our first quarantine hotel.

We had to complete 14 days of government-mandated post-arrival quarantine followed by pre-departure quarantine at another hotel.

This was to ensure that we help keep Antarctica COVID-19-free. The highlight of our days in the first 14-day quarantine were the cage walks. They set up a small cage in the car park and we would sometimes get to go out for a walk in there. It was surreal.

We were only meant to be in pre-departure quarantine for three days before flying onto Wilkins airstrip in Antarctica, and then straight onto Concordia station at Dome C. Unfortunately, the weather in Antarctica had other ideas and we had a couple of false starts. It was 14 December before we managed to successfully leave Hobart.

Upon arrival it became clear we would not be able to reach Concordia for a few days, so we were taken to Casey, an Australian station. 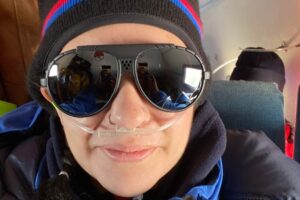 Georgina on the Basler with her oxygen mask. Credit: French Polar Institute, National Antarctic Research Program and University of Birmingham

We spent our four days at Casey:

On 18 December, we boarded the Basler aircraft and flew up to Concordia. The aircraft was not pressurised or heated, so we had to be in our full polar gear and we were given oxygen. This was another surreal experience.

I was welcomed to the station by the rest of my ASTEP colleagues, who were already at the station, and prepared for the work to begin.

Day-to-day in the sub-zero

My primary mission in the Antarctic was the installation of a data analysis pipeline to process the images taken by the state-of-the-art camera bought by Science and Technology Facilities Council (STFC).

In a nutshell, it is the software that takes us from what are essentially just photos of the sky, to the data that are useful to us. In this case, we need to be able to produce graphs of the brightness in relation to the time of the star we are focusing on.

I had completed most of the development prior to arriving, but the software needed to be installed at the base and thoroughly tested. Due to the lack of internet connection, this all had to be done in person.

Testing the software to ensure everything is set up correctly was vital as we only got one chance to install it. If something was missing after it was completely installed, it would be very tricky to rectify.

I was primarily working in the science office in the main station building, on the local network. So, I could connect to the control servers and I didn’t have to get dressed in the polar kit too often. My co-workers, who spent most of their time with the telescope and at the astro shelter, weren’t so lucky and had to get dressed in the kit every day.

This is an exhausting process.

Lunch was served at midday where I would get some pretty excellent soup and bread made by the fabulous chefs on the base.

After lunch it is time for a nap. Existing at Concordia is indescribably tiring, the low air pressure and 40% less oxygen make everyday tasks tenfold more exhausting.

Once my energy had been restored, I would go back to work reprocessing last year’s data and searching for bugs in my software. Almost every day I found something to fix. Consequentially, I spent a lot of time solving problems without having the normal internet access we are usually accustomed to.

For very tough things, I could use the computer in the science office to search the web, but it was awfully slow. Also, there were several of us in there, so I didn’t count on it much. It was still a fun challenge to have to figure stuff out alone! 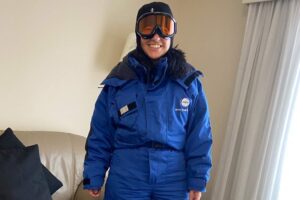 Typically, planetary signals look the same in blue and in red whereas the signal of something that isn’t a planet will look different in each colour channel. Therefore, the new setup will permit rapid and more efficient planetary confirmation.

With the camera and optical setup complete, and the control software tested, it is now ready for the start of the observing season which begins in mid March.

On the hunt for planets

Sometimes when we look for extrasolar planets, what might appear to be a planet is actually a different astronomical object. In cases like these, there will be a difference when we compare what is seen on the red wavelength camera to the blue wavelength camera. This discrepancy allows us to distinguish a detection of the extrasolar planets we are searching for from other astronomical bodies.

Objects likes stars that are hot enough to produce their own light don’t all produce light of the same colour. Their dominant colour depends on their temperature, with the very hottest stars appearing blue and the coolest red.

We don’t have telescopes with high enough resolution to find Earth-like planets around Sun-like stars. Therefore, we stand a better chance of finding these small, rocky, habitable planets by detecting the cooler stars these planets typically orbit.

The new camera box on ASTEP will give us the resolution and the precision to detect these cool stars. This empowers ASTEP to join the hunt for Earth-like planets and utilises some of the best observing conditions on the planet due to its unique Antarctic location.

As of now I am anxiously anticipating the start of the new season! There are hundreds more candidate planets for us to go after and the range of planets we can confirm is now significantly broader.

The mount is due to be installed in December 2023 and is projected to extend the lifetime of the project for another ten years.

Further information about the mission.

The funding bodies for this project are:

Georgina Dransfield is a third year PhD research student at University of Birmingham in the Sun, Stars and Exoplanets research group within the School of Physics and Astronomy.

Her research is predominantly focused on exoplanets and how we can group them together.

She is looking at where exoplanets fit in with populations of well-studied objects in order to learn more about the atmospheres of exoplanets.

This work towards improvement of techniques to determine whether or not a planet has, for example, water in its atmosphere.

This will allow us to spot potential candidates for sustaining life.