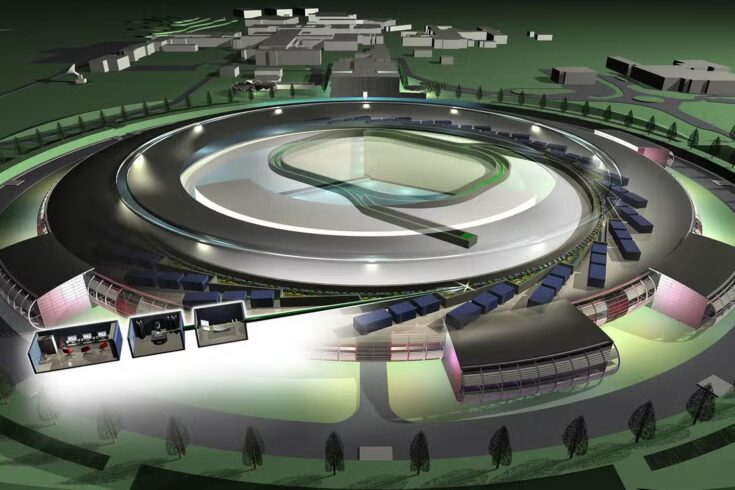 In partnership with a Canadian technology firm, the Science and Technoloy Facilities Council (STFC) have developed a prototype synchrotron detector.

The detector will help realise the potential of next-generation synchrotron X-ray facilities and position the UK as a world-leader in the field.

10 billion times brighter than the Sun

Diamond Light Source, located at the Harwell Science and Innovation Campus in Oxfordshire, is the UK’s national synchrotron science facility. At Diamond, electrons are accelerated at close to the speed of light – creating beams of light ten billion times brighter than the Sun.

These beams of high-intensity X-rays allow Diamond to act like a super-powered microscope that allows scientists to study everything from fossils to jet engines and viruses to vaccines. X-ray imaging of this kind has driven scientific discoveries ranging from solving the structure of DNA to imaging the coronavirus and transforming modern battery performance.

Diamond has been operating since 2007 and, while it is still a world-leading facility, like most synchrotrons around the world, it is getting ready for a significant upgrade. The next generation Diamond-II facility will incorporate new beamlines as well as comprehensive upgrades to its optics, detectors, sample environments and delivery systems. The high-powered computing systems needed to keep everything running will also be updated.

700 billion times brighter than the Sun

One of the major hurdles any upgraded X-ray synchrotron faces is finding detectors that are capable of coping with the higher energy X-ray beams. Today’s synchrotron detectors are predominantly silicon-based sensors, which work well with the existing lower X-ray energies but they will become transparent or ineffective at the increased brightness and energies that will be available at Diamond-II and many next generation facilities.

Getting the full scientific promise out of the new synchrotrons will require a leap in detector technology over and above the usual incremental steps in improvement usually made by such technologies.

The need for such a leap in detector technology was anticipated by the UK teams and spurred them to develop a partnership with a Canadian company: Redlen Technologies.

As part of their Disruptive Instrumentation of Future Extreme Radiation (DIFFER) project, STFC identified Redlen’s cadmium zinc telluride (CZT) detector material as the leading solution. Compared to silicon, CZT has a higher density and atomic number to efficiently detect high energy X-rays. Redlen’s CZT is unique in its ability to operate at the extreme fluxes (millions of photons every second) of next generation synchrotrons.

The team in the Technology Department at STFC have been one of the leading groups in developing cameras for high energy X-ray detectors for more than a decade.

Our work on semiconductor detectors, high speed readout microelectronics and how to build these types of cameras has put us in a great position to develop the detector systems needed to make the most of the upgraded synchrotrons.

Thanks to the innovative collaboration, UK scientists have been able to work with Redlen’s engineers to develop and build a prototype detector array based on their CZT detector technology. This technology could be useful for many major light sources and the team will be engaging with the light source and detector community to look at ways to support the development of new detectors at other international light source research facilities.

The DIFFER project has allowed the UK and STFC to position themselves as global leaders in the field of X-detectors for next-generation large scale science facilities.

We investigated many detector materials and found that the high flux CZT from Redlen is by far the best candidate sensor material.

The Global Research and Innovation Partnership project was a unique way to formalise the UK-Canada collaboration between STFC and Redlen, invest in pushing the detector technology and demonstrate the foundation technologies that will be needed for Diamond II.

The project has been funded by the UK government’s Department for Business, Energy and Industrial Strategy and supported by the UK’s Foreign and Commonwealth Development Office and the Science and Innovation Network.