Bringing scientific sculpture back to life 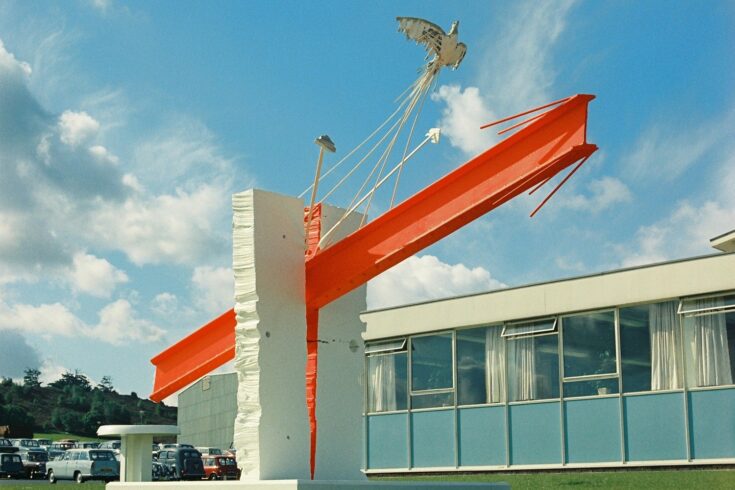 The oldest piece of artwork at Daresbury Laboratory has undergone expert restoration. We look at the history and science of the piece and the artist behind it.

To many, art and science might not seem like natural bedfellows. One is expressive and from the heart. The other involves theories, predictions and observations. But art and science are in fact perfect friends – with art having been used for centuries to visualise often complex scientific phenomena.

At the Science and Technology Facilities Council’s (STFC) Daresbury Laboratory, there are several pieces of artwork on the campus which colleagues are lucky enough to be able to appreciate each day. Each piece is linked to science in general, and some of them are explicitly linked to the work of STFC.

The Dooley sculpture: Splitting the Atom

The oldest piece of artwork on site dates back to 1971. Named Splitting the Atom, the large sculpture was created by Liverpool artist Arthur Dooley.

The artist was gifted 10 tonnes of magnetic steel and two pole tips from the first small cyclotron, a compact particle accelerator, to operate outside of the USA. He used these pieces to represent a beam splitting the uranium nucleus – a process known as nuclear fission. He also added a dove of peace flying up from the fission products and neutrons.

The cyclotron elements which make up a huge part of the sculpture were originally designed by Sir John Cockcroft, after whom the Cockcroft Institute based at Daresbury Laboratory is named. Cockcroft and Ernest Walton won the Nobel prize for Physics when they recorded the first artificial disintegration of an atomic nucleus – commonly known as splitting the atom.

Other elements of the piece were found and reclaimed, and Arthur mainly built it in-situ at Daresbury due to the size. 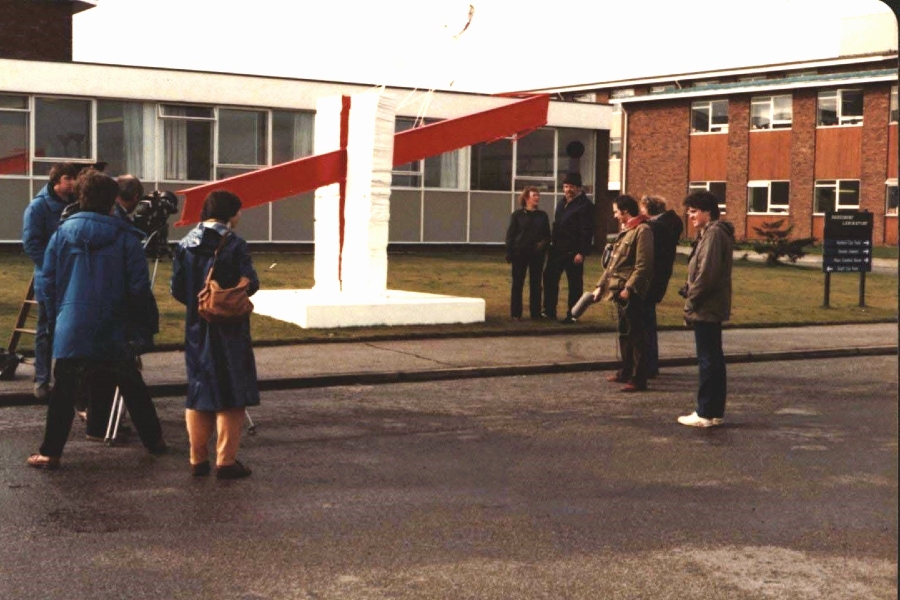 Artist Arthur Dooley (in the hat in the background) with a TV documentary crew at Daresbury Laboratory in the 1970s. Pictured in the foreground in white shoes is artist Stephen Broadbent who has worked on the sculpture restoration. Credit: STFC

When it was first unveiled, the sculpture sat near to the entrance of the site. It was moved to accommodate site developments and now sits by the iconic Daresbury tower. After 51 years on site the piece was in need of some attention, so the experts were brought in.

Artists Stephen Broadbent and Peter Davidson have worked on the sculpture to bring back the original colours and restore areas which were showing their age – such as the dove. 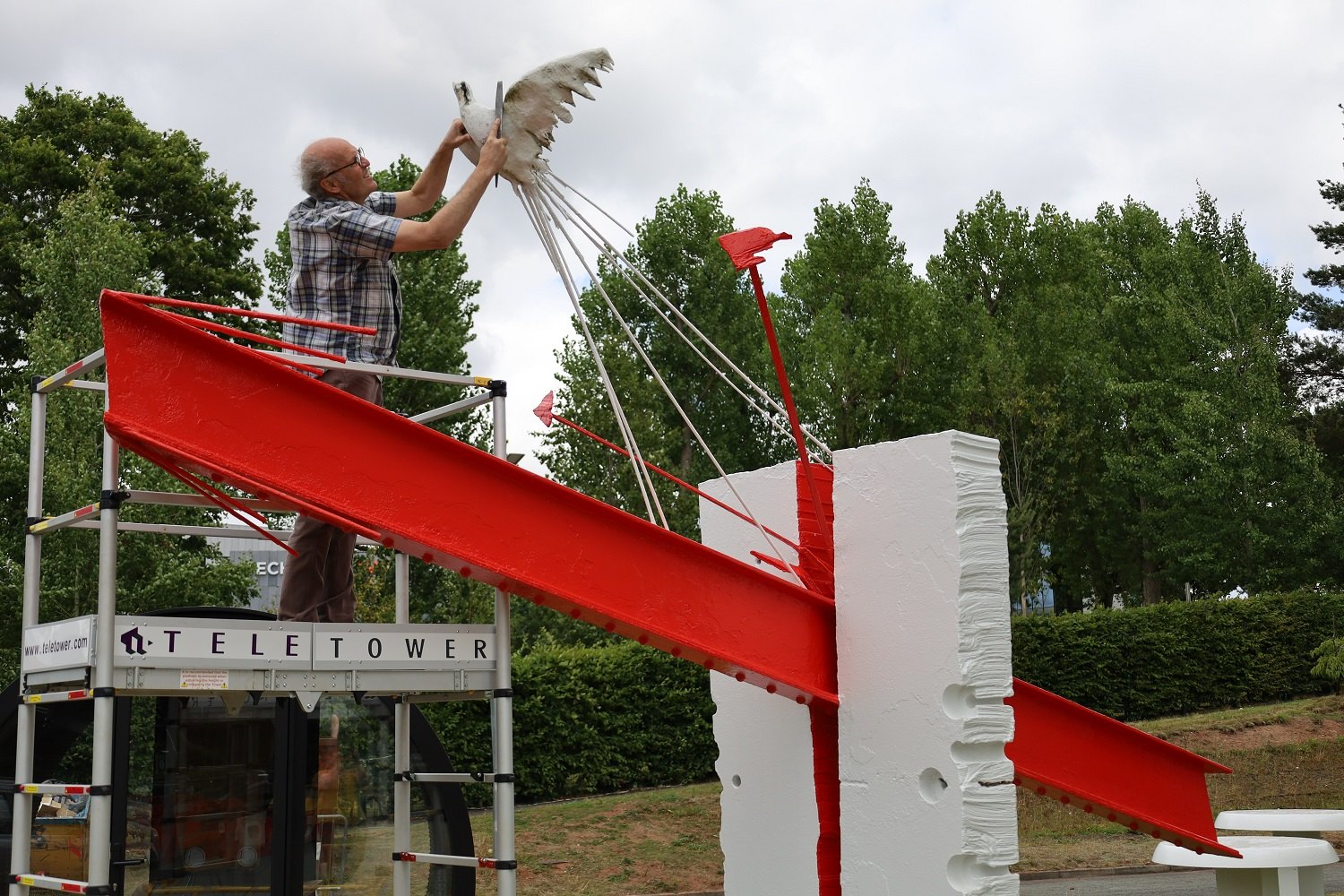 Artist working on the restoration of the Splitting the Atom sculpture by Arthur Dooley at Daresbury Laboratory. Credit: STFC

Both artists have worked with Arthur Dooley in the past. Stephen worked with him for four years, and Arthur was his best man and considered as family. Stephen is also no stranger to Daresbury Laboratory. He designed the Linear Garden, which hugs the side of the Laboratory boundary, depicts a pathway of light which allows visitors to walk through the spectrum of colour. It was inspired by Arthur’s work with the inclusion of a white bird motif, much like the peace dove, which runs throughout the work. The bird is symbolic of the white light which refracts in each of the gardens to create colour.

There has been work done on the piece previously.

If you look at archive footage the steel work was much more skeletal than it is now.

But we worked on the steel work and also the fibreglass bird which had deteriorated, and brought the colours back to their original shades. 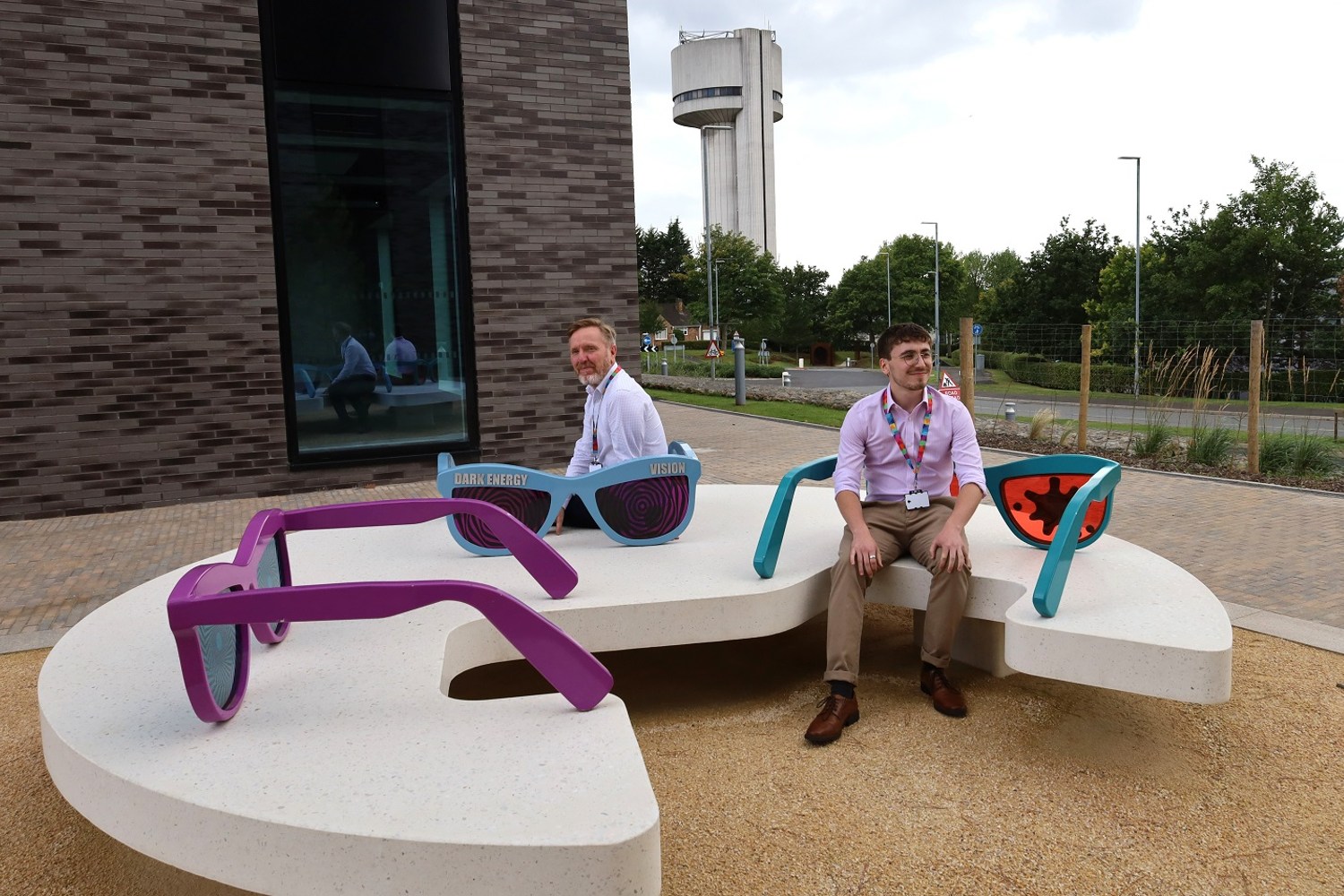 Art is a powerful tool for us to bring science to a wider audience, so it is important that the Arthur Dooley sculpture is here for many more years.

The work that Stephen and his team have done has brought it back to life, ensuring that staff and visitors can enjoy it fully now and I am delighted with Stephen’s support and contribution.

It seems especially fitting as it is Daresbury Laboratory’s 60th year, so the restoration is part of that story now as well.

The laboratory is planning a virtual artwork tour to enable people to find out more about the various pieces on display on site. It will be available later this year.