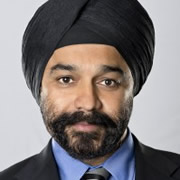 He oversees a portfolio of co-investments and collaborations across the region and his team works to grow the Innovation Center’s networks within the EMEA innovation community, which includes building partnerships with academia, venture capital, entrepreneurs, NGOs, and governmental organisations. Harpal also represents Johnson & Johnson on the UK Life Sciences Council.

Before joining Johnson & Johnson Innovation, Harpal spent 15 years with Cancer Research UK (CRUK) and served as the organisation’s CEO from April 2007 until June 2018. Prior to this, he was Chief Operating Officer & Executive Director of Development at CRUK and served as CEO of Cancer Research Technology (a subsidiary of CRUK) from 2002 to 2007.

Prior to CRUK, Harpal worked with McKinsey & Co, advising health care organisations and pharmaceutical companies on strategy and operations. From 1993 to 1997, he was CEO of The Papworth Trust which focuses on pioneering rehabilitation services for people with acquired and congenital disabilities.

From 1997 until 2002, he was founding CEO of Nexan Group, a venture capital-backed medical device company, creating and marketing novel cardio-respiratory monitoring technologies to reduce premature mortality in patients with congestive heart failure.

In 2015, Harpal was commissioned by the UK Prime Minister and the CEO of NHS England to develop a strategy for transforming cancer services in the NHS, resulting in “Achieving World-Class Cancer Outcomes: A Strategy for England 2015-2020”, published in summer 2015, and nearing completion of implementation.

He is a Non-Executive Board member of UK Research & Innovation (UKRI) and the Senior Independent Director of Innovate UK.

Harpal gained a Masters in Chemical Engineering from the University of Cambridge, and an MBA as a Baker Scholar from Harvard Business School. He has been awarded Honorary Doctorates from the Universities of Manchester, Newcastle and Glasgow and the Institute of Cancer Research.

He holds an Honorary Chair in Cancer Science at the University of Manchester, and Honorary Fellowships with the Royal College of Radiologists, the Academy of Medical Sciences, and St John’s College, University of Cambridge.

In 2016, he was knighted by Her Majesty Queen Elizabeth II for services to cancer research.