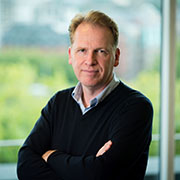 Nigel Toon is the co-founder, Chairman and CEO at Graphcore.

Graphcore is a young silicon and systems company that has developed a new type of processor to accelerate artificial intelligence. Since the company’s founding in 2016, Nigel has secured over $700m in funding and support for the company from some of the world’s leading global venture capital (VC) and strategic investors.

Nigel has a background as a technology business leader, entrepreneur and engineer having been CEO at two successful VC-backed processor companies and at a major US based publicly listed semiconductor company.

He is often called upon to speak at major industry events. He has been recognised with numerous industry awards including:

Nigel has served as a Board Member and Chairman at a number of technology businesses. Including as a non-executive director at Imagination Technologies PLC, as well as leading their technical advisory board, until its acquisition in 2017.

He is the author on three granted patents.