Saving our planet from a sea of plastic 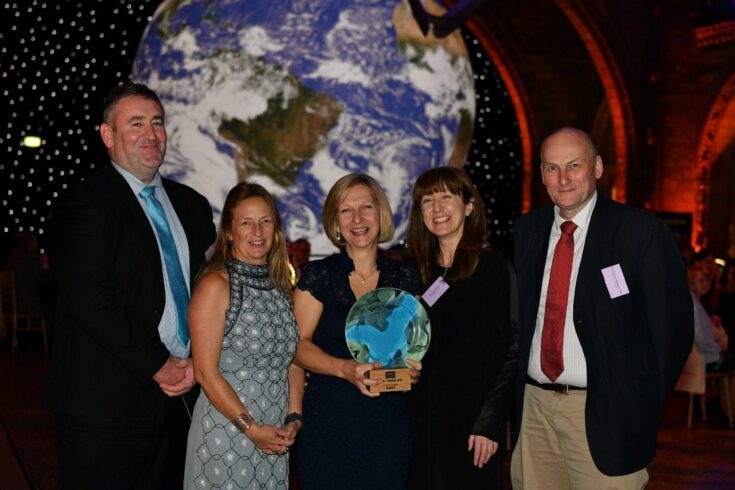 An interdisciplinary team helped to ban microbeads by proving that microplastics are in the marine food chain.

Plastic has a role in almost every aspect of our lives, but there is mounting concern over its environmental impact. Discarded plastics contaminate vital ecosystems and threaten the food chains we rely on.

Since the mid-2000s, NERC science has examined the extent and effects of plastic pollution throughout the environment, uncovering its presence everywhere from UK river basins and soils to remote oceans and the Antarctic landmass.

NERC’s support for world-class science, research infrastructure, innovation and training has revealed the hazard to both wildlife and people from long-lasting plastic pollution, and helped to deliver practical solutions to the problem.

Professor Tamara Galloway (University of Exeter), Professor Richard Thompson OBE (University of Plymouth) and Dr Penelope Lindeque (Plymouth Marine Laboratory) are world-renowned authorities on marine pollution. Working with colleagues they were the first to predict that microplastics could be widespread in the marine food chain, and provide proof of it.

The team started investigating the impact that microplastics – tiny pieces of plastic from sources including visible plastic pollution and microfibers from clothing – could be having on marine life. They were the first to predict that microplastics could be widespread in the marine food chain and went on to prove this.

Tamara’s expertise in biochemistry made her familiar with the impacts of hormone-disrupting synthetic chemicals, including many used in plastics. She was keen to see how plastics, particularly small ones, would help spread the contaminants through the environment. Since 2003 she has collaborated with Richard Thompson, a marine ecologist, who had obtained funding for a small-scale pilot study that confirmed tiny traces of plastic could be seen in animals and sediments. This led to a more detailed survey of the impacts of marine plastics.

The techniques that Tamara, Richard and their collaborators needed had to be developed alongside the science. Advanced laser techniques, bioimaging and methods adapted from clinics were all brought to bear on the problem of how microplastics are taken up from seawater and sediments by sea life, and how they make their way up the food chain. Soon the researchers were turning up the evidence that these tiny fragments of plastic have the potential to impact all kinds of marine creatures. Metabolism was being altered, immune function changed, growth and reproduction affected.

They had identified 280 different species at both ends of the ocean food chain that had ingested microplastics, mistaking them for particles of food.

The problem is plastics don’t degrade. You can think these materials aren’t a problem, but this study revealed an issue everybody could see.

On behalf of UKRI, NERC and Innovate UK lead a coalition that aims to make the UK a leader in sustainable plastic packaging and in reducing its environmental impact. The government has announced up to £60 million of funding for this initiative. This is in addition to the £20 million Plastics Research and Innovation Fund aiming to explore new ideas that can change UK plastics manufacturing and consumption patterns.

NERC also leads a collaboration between UKRI and think tank Policy Connect to engage parliamentarians and industry with research to guide UK solutions for managing and reducing its waste plastic.

Video credit: NERC.
On-screen captions and an autogenerated transcript are available on YouTube.

The team’s pioneering discovery has directly informed policy, such as the UK microbeads ban, and fed into the rising public consciousness of the impact of plastic pollution on our environment, including advising on the game-changing BBC series Blue Planet II.

In 2016, Tamara, Richard and other collaborators gave parliamentary testimony on the extent of the problem. They reported that their studies were finding plastic pieces in seawater samples from around the world. This evidence contributed to the UK banning of microbeads from cleaning products and some cosmetics, which came into force in June 2018.

Although microplastics are made by the breakdown of all kinds of synthetics, including fibres from clothing, their deliberate manufacture to bolster the properties of personal care products struck members of the team as particularly shocking. The House of Commons Environmental Audit Committee agreed, its Chair Mary Creagh MP noting “a single shower can result in 100,000 plastic particles entering the ocean.” Defra also agreed. The ban soon followed.

Thanks to the 2018 UK ban on plastic microbeads in certain products, 4,000 fewer tonnes of plastic enters the oceans per year. NERC research also supported policy changes in the US and Canada, and helped the UN frame its policy advice on plastic pollution.

The team won the Societal Impact Award and Overall Winner Award at the 2018 NERC Impact Awards.

As a specialist on the marine environment working for NERC’s British Antarctic Survey, Dr Lucy Quinn gave a compelling interview to Blue Planet II about her work. This was a key part of the programme’s message about the harmful impacts of plastic waste on wildlife. Find out more about Lucy’s work on Blue Planet II.

After securing his NERC-funded PhD, Dr Chris Sherrington joined consultants Eunomia and is now an acknowledged authority on topics such as microplastics produced by tyre wear. He has provided important input to the European Strategy for Plastics, and also gave evidence to the Environmental Audit Committee. Find out more about Chris’ work.