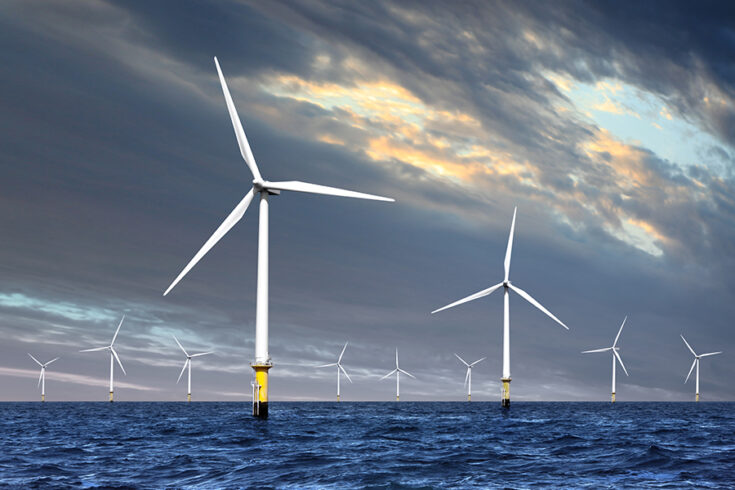 Environmental research has enabled the UK to lead the world in offshore wind energy while protecting key marine species and habitats.

The UK is the world leader in offshore wind energy, with more capacity installed than any other country. Offshore wind powers over 7.5 million UK homes, and a planned fourfold increase by 2030 will generate more electricity than is currently used in UK homes.

The sector is an engine of clean growth, produces millions of pounds of tax revenues, creates thousands of jobs in coastal communities where levelling-up is a priority, and is a key enabler of the UK’s first-in-world commitment to net zero greenhouse gas emissions by 2050.

Crucially, all this activity has not come at an unacceptable environmental cost. The UK’s ability to exploit opportunities also comes with the need to safeguard marine mammals, birds and habitats.

NERC science is one of the keystones of this remarkable success story. It delivers a powerful combination of innovation, insight, rigour and impartiality that minimises risks and maximises benefits for all of the sector’s stakeholders.

NERC science is providing tools to drive further sector expansion while protecting the environment. This includes long-term detailed datasets and world-leading models that enable governments to identify the most appropriate sites for offshore wind farm development and to take evidence-based decisions on applications by developers. Areas include:

The novel solutions developed through targeted environmental research supported by NERC and others have been instrumental in ensuring the sustainable development of offshore wind in Scotland.

NERC-funded research has enabled evidence-based assessments for new wind farms. SMRU has provided robust data which companies such as Ørsted UK have relied on within their Environmental Impact Assessments to support consent applications for new offshore wind farms.

Detailed knowledge of the local seabed and hazards has enabled companies to optimise wind farm construction. The BGS models have allowed projects to better predict hazards, refine foundation design and optimise wind farm layout. All of these contribute to reducing the cost of offshore wind farm development.

NERC-funded research is delivering reliable, impartial resources that are freely available to all. This includes location-specific scientific knowledge which helps communities and organisations to weigh up the potential impacts of offshore wind projects.

UKCEH’s work on internationally important seabird colonies is invaluable not only to the RSPB but also to industry, statutory decision-makers and the conservation of our marine environment.

A world-leading computer model developed by the National Oceanography Centre (NOC) underpins the UK Renewables Atlas. This independent assessment of marine energy resources was accessed nearly 4,000 times in 2020 by organisations including charities and research institutes.

NERC science is also supporting the growth of the UK wave and tidal energy sector, which is less developed than offshore wind. Ground-breaking programmes have brought together researchers, government and industry to address key knowledge gaps and
risks.

For example, new environmental monitoring techniques have helped MeyGen in Scotland – the world’s biggest planned tidal stream project – to fulfil consent conditions and set up cost-effective and reliable monitoring. These techniques were developed by:

NERC continues to support research, training and innovation that will benefit the offshore renewables sector and so deliver clean growth. Recent investments include ECOWind, a £7 million programme with The Crown Estate and Defra to investigate how marine ecosystems will respond to the continued growth of offshore wind alongside other pressures such as climate change.

As Senior Marine Ornithologist at Marine Scotland Science, Julie applies skills developed during her NERC-funded PhD to advise the Scottish government on the effects of marine renewables on seabirds. Julie acts as a bridge between academic research and government decision making, working closely with researchers, nature conservation bodies and industry to identify the latest scientific insights.

In her role as Senior Scientist at HR Wallingford, Kerry uses skills developed during her NERC-funded PhD to advise offshore wind companies and regulators on erosion around wind turbines and cables. By modelling and monitoring the effects of scour, she helps companies to save money and maximise energy production by planning developments effectively and spotting problems early during operation.