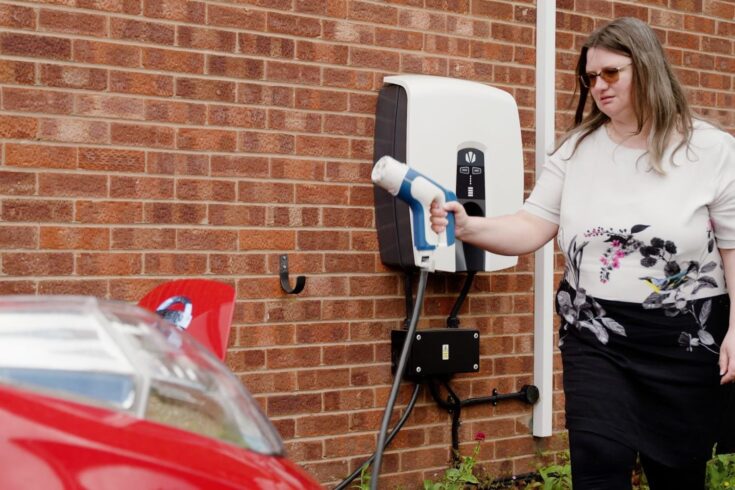 The world’s biggest domestic trial of electric vehicle-to-grid (V2G) charging may have come to an end, but it is still paying dividends for Kath Manning.

Kath is so committed to a sustainable lifestyle in Redditch that she was the third of 320 Nissan Leaf owners to sign up for the £3 million Sciurus project.

All allowed their cars to be fitted with V2G two-way charging technology linked to their home energy supply.

The aim was to demonstrate that V2G could provide a useful and viable source of energy for the national grid, especially at times of peak demand in local areas.

Sciurus was one of 20 projects in the V2G programme. The projects were delivered by Innovate UK with £30 million in funding from the Department for Business, Energy and Industrial Strategy and the Office for Zero Emission Vehicles.

Sciurus was led by domestic energy supplier OVO whose technology arm, Kaluza, devised the V2G platform for the V2G charger developed by Indra. The other partners were Nissan UK and Cenex.

The sophisticated Kaluza ‘brain’ looks at the price of energy when people plug their cars in, along with any preferences set by the customer on a mobile app. It then decides when to recharge and when to discharge the car’s battery, for maximum revenue.

For Kath, it was just a matter of coming home, plugging in and pressing a button.

I use the app to set the minimum charge, 25% in my case, and the maximum at a level I’m comfortable with.

The V2G system ensures the cars’ batteries are topped up at a lower price than the peak time tariff received to feed electricity back into the grid.

Kath is one of a number of people who are continuing to use V2G, following the trial.

The income from the V2G means that my driving miles are free. But now I increasingly think of it as money off my entire energy bill. Over the last month, looking at my electricity usage overall, I am actually £7 in credit thanks to V2G.

Her fixed rate tariff with OVO ends this summer but Kath feels that the V2G benefits will cushion her from the steep rise in energy bills.

I’m sticking with V2G for as long as I can. It’s running very smoothly now and earning me money as well as supporting the grid.

Sciurus is helping UK businesses develop world-class technologies that allow electric vehicles to send energy back to the grid. This benefits both electric vehicle owners and the UK’s energy system, while moving towards a zero-emission future.

Find out more about V2G around the world.