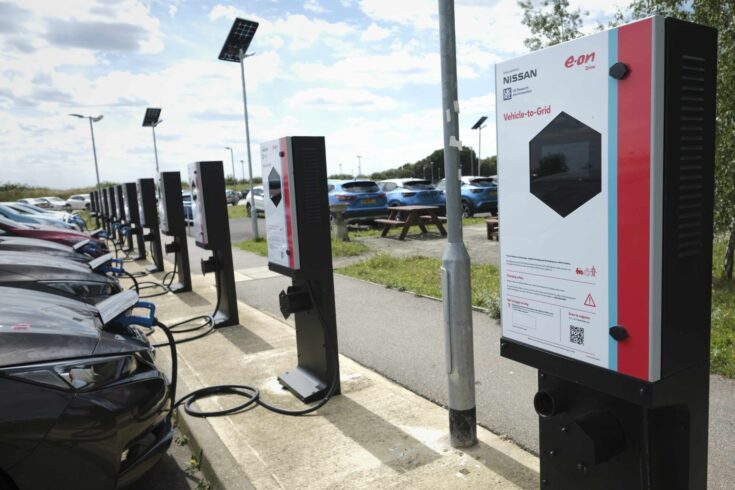 A truly flexible system reacts to the needs of people and business while making best use of renewable energy sources such as solar and wind.

The £4 million e4Future project was part of the world’s largest and most diverse vehicle-to-grid (V2G) demonstration programme, delivered by UK Research and Innovation through Innovate UK.

Funding for V2G came from the Department for Business, Energy and Industrial Strategy and the Office for Zero Emission Vehicles.

e4Future’s bi-directional charging units were deployed from St Andrews University in Fife, Scotland, through Yorkshire and all the way to Epping Forest in Essex.

Nissan’s partners during the four-year collaboration were:

The project collected data to test and refine different business offers, including incentives to EV fleet operators for providing V2G services. EON rewarded them for energy exported back to the grid.

Those trials are continuing, with an E.ON Drive app helping drivers and fleet managers to check charging status and schedule their recharging and discharging sessions. They can also find out when each vehicle will be ready for the road.

The knowledge gained from the project has helped e4Future to identify viable routes to market and to suggest how V2G can contribute to much-needed flexibility in the energy system.

It also addresses some of the challenges facing V2G in its early days, particularly in establishing a reliable business case at a time of evolving energy markets and regulation.

In addition, Imperial College London has produced ground-breaking work on whole-energy system benefits of V2G. The Newcastle University team devised a tool to simulate V2G impacts on distribution networks and also made a cybersecurity assessment of V2G systems.

The trials were taken up only by public sector fleets. That underlined the need for V2G to evolve as a more attractive commercial proposition.

Research conducted by the e4Future consortium underlined the positive impact that V2G can have for all consumers. It also found that a commercially attractive balance of installation cost and annual reward must be found to incentivise mass take-up.

There is enormous potential in V2G to deliver huge savings.

In financial terms it can benefit electricity system operators and vehicle fleets, indeed all consumers, and in environmental terms it can significantly cut carbon dioxide (CO2) emissions across the UK power system.

V2G at scale can deliver overall power system cost savings of £410 million to £885 million a year during the next decade by offsetting capital and operational expenditure for the grid.

Additionally, it would allow so much intermittent renewable energy onto the grid that carbon emissions from the power system could go carbon negative, as low as minus 243gCO2/km.

Future innovation should drive down the cost to make it commercially viable for a wider group of customers.

Find out more about V2G around the world