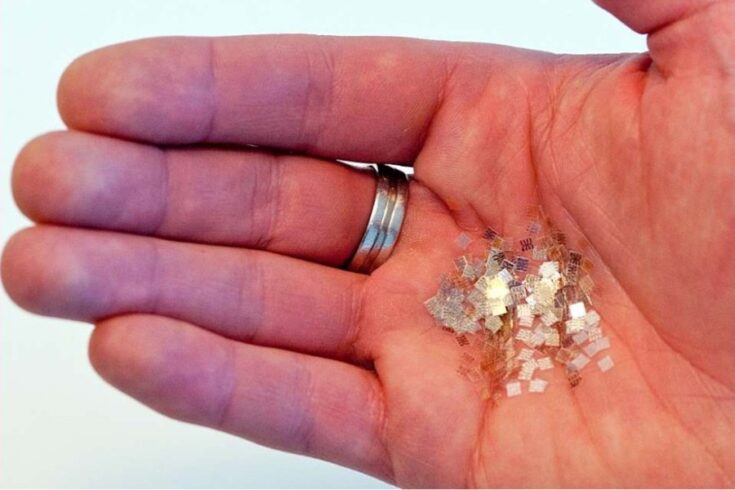 Innovate UK-funded company PragmatIC, a world leader in low-cost flexible electronics, has developed a flexible integrated circuit that is thinner than a human hair but with the processing power of a silicon chip.

An Innovate UK award of £250,000 in 2014 helped PragmatiC develop a prototype for this ultra-thin film version of its technology.

Using traditional silicon integrated circuits previously made internet connectivity costly for mass market items. PragmatiC’s circuits can be easily applied to or embedded in a huge range of everyday items. This breakthrough makes it easier to create ‘smart’ devices that use applications such as radio-frequency identification tags and short-range wireless communication to connect with each other and the internet.

PragmatIC’s flexible circuits have created the potential for trillions of smart objects that can engage with consumers and their environments. The Cambridge firm has received £2.5 million from Innovate UK for a range of funded projects to develop this technology. Innovate UK is supporting the company with Smart grant funding to further develop the project.

Richard Price, Chief Technology Officer, PragmatIC Semiconductors, said: “We’ve benefited from many of the funded project options available through Innovate UK, including two Knowledge Transfer Partnerships. There’s been a lot of support from Innovate UK for what we’re doing.”

PragmatIC completed a £5.4 million equity funding round in 2014 and secured another £18 million in October 2016, including a strategic investment from Fortune 500 company, Avery Dennison.

The company’s customers include multinational companies dealing in mainstream electronics, consumer goods, packaging and security printing, among other sectors, and numbers continue to grow.

PragmatIC has secured £60 million in new funding which will be used to build a second FlexLogIC fab in Sedgefield, County Durham, to expand capacity and meet rapidly growing demand. This expansion is supported by $80 million funding, which will also allow the company to more than double staff numbers.

The company has also received further Innovate UK funding to lead a project to increase the value of plastic waste. Packaging will be tagged with unique digital IDs to simplify the tracking and separation of packaging waste in a materials recovery facility.

Read about PragmatiC’s Smart grant project on Gateway to Research.

Read about the Sustainable Plastics Recycling Innovation by Tagging Electronically project on Gateway to Research.