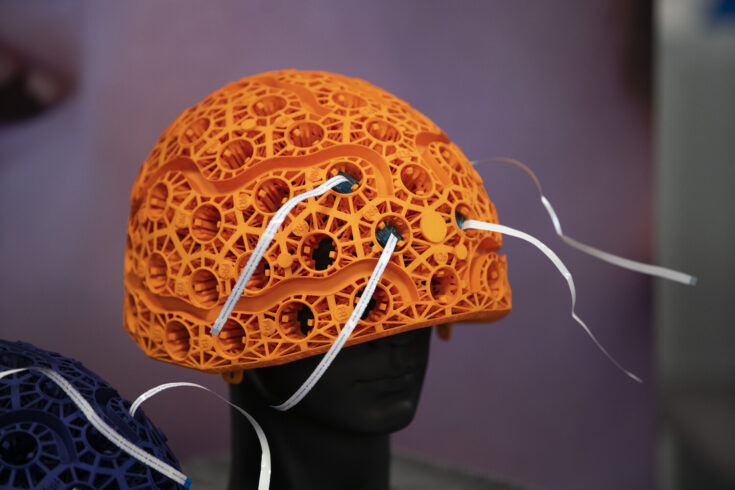 Find out how five new inventions from wearable brain scanners to new clocks are delivering real-world benefits to multiple industries.

Developed in the UK, they each redraw the frontiers of what is possible.

These technologies open new industrial opportunities as well as a road to high skilled employment.

The technology offers higher sensitivity and spatial resolution with a scalable, affordable technology.

Unlike large, room-sized and rarely available standard MEG scanners, the quantum-enabled device fits on any size patient’s head and allows them to move around whilst being scanned.

Currently the scanner is in use at:

It is transforming our understanding of brain developments in childhood and neurological disorders including autism, dementia and epilepsy.

Find out more about the brain scanner.

A company spun out from the University of Bristol, QLM Technology, working with BP and other partners, uses quantum technology to see and measure emissions of greenhouse and other gases.

Using technology that combines a light detection and ranging (LIDAR) and single photon avalanche detector, the cameras can simultaneously visualise and quantify emissions from distances of up to 200 metres.

It paves the way for the energy sector to dramatically cut emissions, which are polluting, costly and dangerous.

The first commercial trial of a quantum secured communications network in the world is now in place. Backed by BT, Toshiba and global consultancy EY, it provides the antidote to data theft.

Linking the major business and financial centres in Canary Wharf to the West End of London and along the business corridor to Slough in London. The quantum key distribution (QKD) works across BT’s Openreach fibre network, giving London and its wider business centres end-to-end encrypted communications.

Using QKD allows the practical use of existing quantum-secured cryptography, instantly detecting and defending against adversaries eavesdropping on the exchange of cryptographic keys.

A gravity gradient sensor that allows what is invisible underground to be ‘seen’ and mapped has successfully passed a landmark open-air trial, correctly identifying a tunnel buried a metre below ground.

The non-invasive technology, measures changes in the pulling strength of a gravitational field when a cloud of atoms is dropped which has implications for:

The sensor is a collaboration led by the University of Birmingham, the Defence Science and Technology Laboratory, RSK Group and Teledyne e2v.

Ten companies and universities have collaborated to create a miniaturised atomic clock to provide precision timing for UK critical infrastructure.

Currently the UK is dependent on Global Navigation Satellite Systems (GNSS) for a timing signal. We rely on these timing signals for a variety of services including:

But these can be easily disrupted accidentally or maliciously, with a five-day GNSS outage costing the UK an estimated £5.2 billion.

Thanks to the Kairos Project this major vulnerability will be removed with miniaturised atomic clocks that are land based and independent of GNSS.

These clocks have the incredibly precise timing vital for a variety of critical infrastructure services, such as:

Adding value to the UK

All the ‘first five’ are based on scientific and engineering advances that exploit understanding of the sub-atomic world.

Each received crucial funding from the UK Quantum Challenge, part of UK Research and Innovation (UKRI), and the UK National Quantum Technologies Programme (NQTP) to create a quantum-ready economy.

The five projects now on the cusp of commercial application will add value not just to our personal lives, but to the wider economy, bringing investment and the growth of scientific and engineering skills across the country.

The brain scanner, for example, is in use at major children’s hospitals, and the quantum secure network developed with our help by BT and Toshiba is now in place and in use. These are real, scalable returns for the real economy.

It is remarkable that they should all, separately, be in their final, pre-commercial trial stage at the same time.