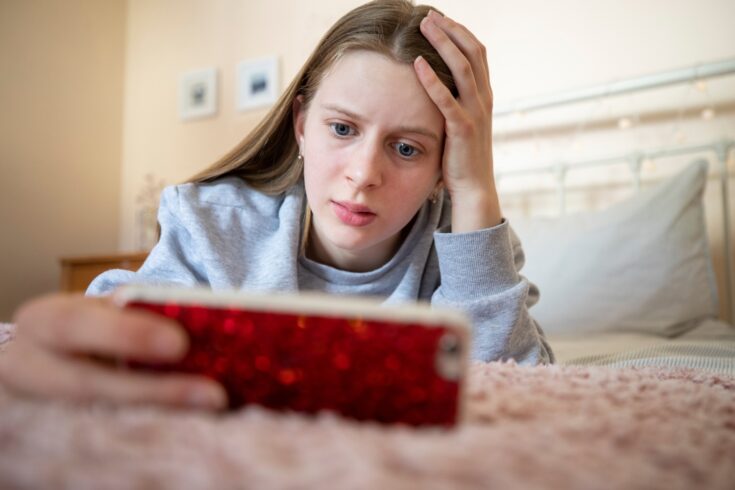 Research on mental ill-health among UK adolescents and its drivers has led to new government policy and strategies for improving young people’s mental health.

Teenage mental ill-health in the UK is a worsening problem, with about 16% of 14 year olds in the UK in 2015 suffering from mental ill-health. The number of young people with high levels of depressive symptoms had almost doubled over the previous decade.

At least half of all people who have mental illness in adulthood have symptoms by the age of 14. This research shows the pressing need for early intervention both to identify mental illness and promote positive wellbeing.

Video credit: ESRC.
On-screen captions and an autogenerated transcript are available on YouTube.

Professor Emla Fitzsimons and Dr Praveetha Patalay used data from the Millennium Cohort Study (MCS), an ESRC-funded longitudinal dataset following the lives of 19,000 people born in 2000 to 2002, to gauge the state of adolescent mental health in the UK.

Their study shows that almost one in four 14 year old girls and one in ten boys of the same age experience more severe symptoms of depression. As the MCS is representative of all individuals born in the UK at the turn of the millennium, this translates to around 166,000 girls and 67,000 boys who were aged 14 at the time of the survey.

Their research not only highlighted the alarming scale of mental illness among young people, but also drew attention to an overlooked distinction between mental wellbeing or life satisfaction and mental ill-health.

“We find that absence of mental health difficulties is not equivalent to good mental wellbeing,” Professor Fitzsimons says. “Moreover, we find distinct factors associated with child mental illness on the one hand and mental wellbeing on the other, as well as factors that are common to both outcomes.”

The research team identified several risk and protective factors for mental health, ranging from being bullied by peers to not feeling safe in one’s neighbourhood, and organised them in four basic groups:

It was this characterisation of factors into the different spheres of young people’s lives that proved so useful for policymakers, as it very clearly highlighted opportunities for action.

Professor Fitzsimons and Dr Patalay’s research provided the first data on the state of young people’s mental health in the UK in over 10 years. This stark evidence, released in December 2017 just before the 2017 Government Green Paper ‘Transforming Children and Young People’s Mental Health Provision’, helped to refocus national health policy on tackling the high levels of mental ill-health among the UK’s youth.

The Department for Education (DfE) used the findings to frame discussion on young people’s mental health and school-based interventions. Research also informed the Department of Health and Social Care’s Prevention Green Paper ‘Advancing our health: prevention in the 2020s’, and its call for urgent action to tackle the broad range of risk and protective factors associated with mental health.

The research team created an easy to understand infographic that provides a conceptual framework for how to approach children’s mental health in schools and in the community. The infographic was used in meetings with ministers and senior civil servants, cited by PHE as ‘pivotal in guiding its thinking’, and informed DfE, local government and child mental health training programmes.

“Young people’s mental health had been on the sidelines of health research for far too long, despite its large impacts on individuals’ lives and society as a whole,” says Dr Patalay. “Longitudinal studies that track people over time are essential to provide policymakers, schools and the public with robust evidence that can help improve long-term outcomes for young people.”

Find out more about the Millennium Cohort Study on the UCL website, which also hosts a briefing paper on the Extent of mental health difficulties at age 14 (PDF) and an infographic on Child mental illness and wellbeing (PNG).