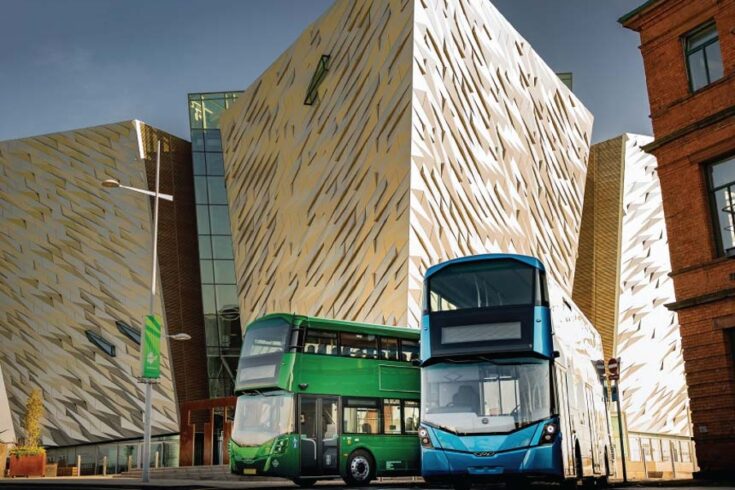 Achieving progress towards low-emission mobility in public transport is essential for a future low-carbon economy. University research collaborations are vital in providing businesses with new processes and technologies and access to world-leading experts. Such cooperation is critical to achieving UK net zero goals.

Initially, the teams efficiently integrated diesel engines into the vehicle driveline before turning to the challenge of electrification in the early 2000s. In 2017, QUB and Wrightbus were part of the Innovate UK, Integrated Delivery Programme 14, that enabled the modelling and vehicle development associated with a fully electric single- and double-deck bus driveline.

Wrightbus has successfully exploited outputs of this project to launch the Streetdeck Electroliner, the world’s most efficient double-deck battery-electric bus. Orders are looking promising, Wrightbus has secured several deals, including:

In 2019, QUB and Wrightbus secured over £2 million of EPSRC funding through the Prosperity Partnership programme. This partnership set out to help achieve net zero emissions in the urban public transport sector, leveraging their joint experience in low and zero emission bus development.

This Prosperity Partnership has been invaluable. We have been able to use our knowledge of electrification of heavy-duty drivelines to understand how they might evolve over the long term within the transport system.

We have also gained understanding of what the impact of new technologies, such as advanced sensing and autonomous systems, will be on next-generation vehicle performance.

Using the knowledge developed in this programme, the team was able to translate its research into an Advanced Route to Market Demonstrator project (funded by the Advanced Propulsion Centre). This project produced the GB Kite Hydroliner, a brand new single-deck bus powered entirely by hydrogen.

In November 2021, Wrightbus announced that the Go-Ahead Group for Brighton and Hove and Metrobus ordered 20 Wrightbus single-deck GB Kite Hydroliner buses. This announcement is part of a deal that could become the largest of its kind in Europe. Wrightbus will deliver the vehicles in June 2022.

QUB was able to apply modelling methods and techniques developed through the EPSRC funding to support development of a rapid innovation programme. The EPSRC funding made what we achieved at such speed possible.

Through grant funding, such as the EPSRC-funded Prosperity Partnership, Wrightbus has developed a portfolio of zero emission buses. This now forms the core of our business.

Wrightbus created up to 300 permanent jobs after winning multiple orders from the UK and Ireland. We’ve grown to more than 820 people employed in the business, and we’re continuing to recruit. This is in addition to the doctoral students at QUB who come to work with us after their research.