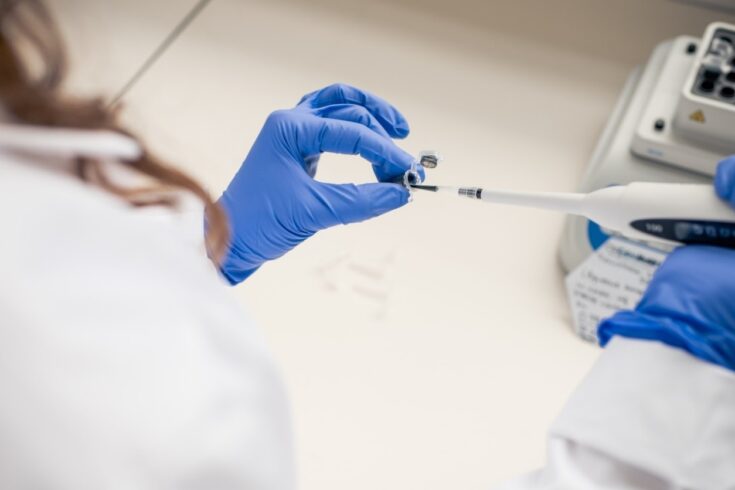 For the global chemicals industry, the drive for sustainability is both a big priority and a big challenge.

A perfect example is the manufacture of ‘fine chemicals’ such as:

Spun out from University of Oxford in 2021, HydRegen has a clear mission, to deliver greener, safer, quicker catalysis technology that can be incorporated into chemical manufacturing infrastructure.

Innovative technology licensed from the university underpins this vision. It harnesses specialised enzymes, including hydrogenase, a naturally occurring enzyme that plays an important role in providing energy in many microorganisms.

The Biotechnology and Biological Sciences Research Council (BBSRC) support made a crucial contribution at every stage of the road to commercialisation. Initial funding for fundamental research generated new, thorough understanding of hydrogenase and the potential to use this enzyme to clean-up fine chemicals manufacture.

Follow-on support then enabled the forging of industry connections and de-risking of the technology. It also helped build business skills vital to creating a proposition that could negotiate the notorious ‘valley of death’.

This is the period in the development of a product when significant increase in investment is required, and where many promising innovations perish.

The story started in the 2000s. Led by University of Oxford’s Department of Chemistry, BBSRC-funded research revealed the properties and behaviour of hydrogenase in unprecedented detail.

Further work supported by BBSRC and others then showed that the enzyme offered promise for a new, bio-based catalysis technology. Proof of concept followed: tiny graphite beads coated with a cascade of enzymes, could, in the presence of hydrogen, catalyse reactions to produce chemical products. The beads could also be regenerated and reused, further boosting sustainability.

Then in 2012 the system won the Royal Society of Chemistry’s prestigious Emerging Technologies Competition.

Right from the start, we could see this would be a useful technology, but lots more had to be done if we were to develop it to the point where it could be licensed to a spinout. That’s why BBSRC support at the pre-commercial stage was so crucial, enabling us to make rapid progress towards market rollout.

In 2014, Professor Vincent and her team secured a Business Interaction Voucher from BBSRC’s Metals in Biology (MiB) Network in Biotechnology and Bioenergy (NIBB).

MiB events provided the ideal opportunity to build relationships with industry, capitalising on interest stimulated by success in the Royal Society of Chemistry competition.

The voucher itself supported a partnership with pharma giant GlaxoSmithKline, who provided a range of assistance as the fledgling technology developed further.

Connections were also made with leading multinationals Johnson Matthey and Dr Reddy’s, resulting in collaborations that helped tie the technology to real-world applications.

In addition, these two companies supported BBSRC industrial studentships that strengthened the team’s skills base.

In 2016, the drive towards commercialisation received another huge boost. A £2.9 million grant was secured from the Industrial Biotechnology Catalyst, an Innovate UK, EPSRC and BBSRC initiative that accelerates industrial biotechnology products’ progress to market.

This grant provided a platform for building up an intellectual property (IP) portfolio around the core patent and for further industrial collaboration to ensure credibility with future investors.

It was also pivotal to establishing an excellent environment for upskilling graduates, hiring talented postdoctoral researchers and nurturing business skills among team members set to play important roles in HydRegen.

HydRegen was founded in May 2021 with:

The fourth founder, Will Barton, is using his experience supporting start-ups, as Chairman of HydRegen. The company currently employs six people but expects to grow this number over the coming months.

Dr Reeve looks to the near future:

We’re currently focusing on selling research and development tools and products, but we’re also expanding, creating high-value jobs and have just completed our latest fundraising round.

Further IP generated by Professor Vincent’s research group at Oxford is also under development towards commercialisation.

Throughout the technology’s evolution, expertise has been developed and nurtured at all career stages. Some of the researchers have taken on key roles within HydRegen (see above). Others have gone on to positions across industry where their skills are being harnessed to drive research, innovation and translation.

The company has also begun to share its expertise and experience with others. It has already been an industrial partner on BBSRC’s Business Interaction Voucher scheme.

One of the postdocs of the team, Jack Rowbotham, has gone on to a BBSRC Discovery Fellowship in Manchester, exploring biocatalysis for novel drug synthesis.

In 2021, University of Oxford appointed Professor Vincent as its first Academic Champion for Women in Entrepreneurship. This reflected her ability to turn scientific breakthroughs into viable business propositions, as evidenced by the emergence of HydRegen.

She will use the position to help pinpoint and dismantle barriers to women’s involvement in entrepreneurship. This is a crucial element in the wider promotion of equality, diversity and inclusion (EDI) and the drive to broaden the pool of talent turning leading-edge science into real-world impacts.